There are 108 stupas at Dochula, built in the memory of Bhutanese soldiers who died in a military strike - Operation All Clear - in 2003 to flush out insurgents from India's north-east region who had camped along the border

A biker from India was seen standing on the dome of a sacred structure in Bhutan, which has sparked outrage on social media in the Himalayan nation and India, where people criticised him for his behaviour that could embarrass the country.

In a video tweeted by The Bhutanese newspaper, the tourist in a black jacket and jeans with protective biking gear is seen climbing a ladder to the top of the memorial structure at Dochula, 20 km from Bhutan's capital Thimphu.

There are 108 stupas at Dochula, built in the memory of Bhutanese soldiers who died in a military strike - Operation All Clear - in 2003 to flush out insurgents from India's north-east region. The insurgents had set up camps in Bhutan along the border with India.

In another photo, a Bhutanese carpenter was seen sitting on the ladder on the dome of the chorten or a religious monument. The local police are looking for him.

The newspaper reported the tourist in the biker outfit has been identified as Abhijit Ratan Hajare, a resident of Maharashtra. "In the second picture the man sitting on the ladder is a Bhutanese citizen and carpenter, Jambay, who was doing repair works on the Chortens," The Bhutanese tweeted. 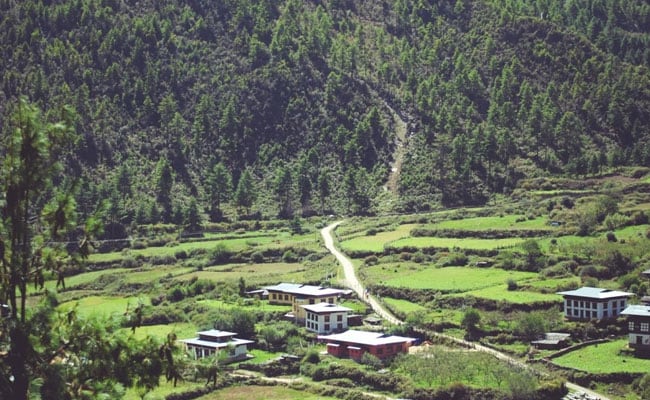 "Abhijit, whose passport has been taken by the RBP (Royal Bhutan Police) has been called in for questioning today. RBP is launching its investigation today. The Indian tourist came across Jambay and he allowed them to climb the ladder. The RBP are in the process of tracking Jambay down," it reported.

The Indian tourist apologised in writing to the police, after which he was released, the newspaper reported.

Indians don't need a visa to travel to Bhutan. However, they should have either a passport with minimum six-month validity or a voter identity card.

For some time now, environmentalists and activists in Bhutan have been raising concerns over a huge influx of tourists that may add pressure on the landlocked Himalayan nation's fragile ecosystem.

Tenzing Lamsang, editor of The Bhutanese that reported the stupa incident first, said unsustainable growth of regional tourists is affecting the country. "The issue is not about discrimination," he said.