An accident was caused when a biker with a pillion rider struck a car door that had been abruptly opened by the driver. 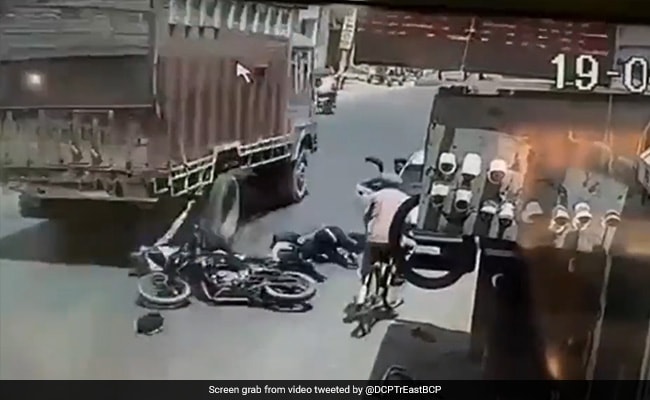 The biker hit the truck and went under the truck that was coming from the opposite direction.

Road safety involves more than just driving carefully at the right speed while following the rules. An unsafely opened bonnet, gate, or a carelessly parked car can also cause traffic gridlock that could be fatal for any other commuter.

In a disturbing video, which is going viral on the internet, a biker is seen approaching from one end and attempting to avoid the driver of the vehicle, who opens the car door carelessly in the middle of the busy road during rush hour.

The motorcyclist is seen colliding with a truck as the video progresses as a result of the car driver's negligence. After the collision, the driver and numerous bystanders can be seen rushing to the biker's aid.

The video was shared by the deputy commissioner of police (east Bengaluru), Kala Krishnaswamy.

The DCP wrote on Twitter, "Please be aware when you are opening the doors of your vehicle and avoid fatal mishaps."

" Please be aware when you are opening the doors of your vehicle and avoid fatal mishaps " @DgpKarnataka@CPBlr@AddlCPTraffic@jointcptraffic@BlrCityPolice@blrcitytraffic@acpcentraltrf@acpeasttraffic@acpwfieldtrf@acpsetrafficpic.twitter.com/WPrL0POeLM

As per the World Bank, with only 1 per cent of the world's vehicles, India accounts for almost 10 per cent of all crash-related deaths. Poor households bear a disproportionate share of the socio-economic burden of road crashes due to lost income (more than 70% of crash victims are from low-income households), high medical costs, and limited access to social safety nets.

The World Bank study further said that road accidents cost the Indian economy between 5% and 7% of GDP each year. Official government data shows that each year in India, road accidents kill about 150,000 people and injure another 450,000. More than half of the victims are pedestrians, cyclists, or motorcyclists, with road users aged 18 to 60 accounting for nearly 84 percent of all fatalities.