Victim of gang rape in India dies at hospital in Singapore 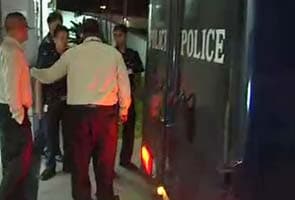 New Delhi: A young woman who had been in critical condition since she was raped two weeks ago by a group of men who lured her onto a bus here died early Saturday, an official at the hospital in Singapore that was caring for her said.

The woman, a 23-year-old physiotherapy student whose rape on December 16 had served as a reminder of the dangerous conditions women face in India, died "peacefully," according to a statement by Dr Kelvin Loh, the chief executive of Mount Elizabeth Hospital in Singapore.

The woman, whose intestines were removed because of injuries caused by a metal rod used during the rape, has not been identified. She was flown to Singapore on Wednesday night after undergoing three abdominal operations at a local hospital. She had also suffered a major brain injury, cardiac arrest and infections of the lungs and abdomen.

"She was courageous in fighting for her life for so long against the odds, but the trauma to her body was too severe for her to overcome." Loh's statement said.

The police have arrested six people in connection with the attack, Indian officials said.

Revulsion and anger over the rape have galvanized India, where women regularly face sexual harassment and assault, and where neither the police nor the judicial system is seen as adequately protecting them.

As government officials and the police appealed for calm, protesters gathered in New Delhi at Jantar Mantar, a popular site for demonstrations, just after dawn. The roads leading to India Gate, the site of earlier protests that had turned violent, had been barricaded by the police, and nearby subway stations were closed. More than 40 police units have been deployed in the area, including 28 units of the Central Reserve Police Force, which are national anti-insurgency troops.

The government, he said, is examining "the penal provisions that exist for such crimes and measures to enhance the safety and security of women."

The six men arrested in the case will be charged with murder, the Delhi police said Saturday morning, as they, too, asked citizens to remain calm.

''We appeal to the people that they maintain peace,'' Satyendra Garg, a joint commissioner of the police, said in a televised interview. ''We want the situation in Delhi to normalize as soon as possible,'' he said.

Until then, he added, Delhi commuters will have to plan their travel carefully and be aware of the restrictions.

Activists and lawyers in India have long said that the police are insensitive when dealing with crimes against women and that therefore many women do not report cases of sexual violence.

India, which has more than 1.3 billion people, recorded 24,000 cases of rape last year, a figure that has increased by 25 percent in the past six years. On Thursday, Delhi government officials said they would register the names and photographs of convicted rapists on the Delhi police website, the beginning of a national registry for rapists.

The family of an 18-year-old woman in the northern Indian state of Punjab who was raped last month by two men and committed suicide Wednesday blamed the police Friday for her death.

Relatives of the woman say she killed herself because the police delayed registering the case or arresting the rapists.

If the police "had done their job, she would be alive today," the woman's sister, Charanjit Kaur, 28, said in a phone interview. "They didn't listen to us; they didn't act."

On Friday, the Punjab high court intervened, asking the police to explain their delay. Three police officers have been suspended in the case, according to media reports. Punjab police officials did not respond to phone calls seeking comment.

Kaur said the men abducted her sister from a place of worship near the small town of Badshahpur on November 13, then drugged and raped her repeatedly.

When her sister reported the attack at the local police station a few days later, she was asked to describe it in graphic detail and was "humiliated," Kaur said.

Over the next few days, she said, her mother and sister were repeatedly called to the police station and forced to sit all day.

But the case was not registered for two weeks, as police officials and village elders tried to broker a deal between the men accused of the rape and the victim. In some parts of India, women are commonly married to men who have raped them.

Kaur said the police told her family that, because they were poor, they would not be able to fight the matter in court.

"They kept putting pressure on my family to take money or marry the accused or just somehow settle the matter," she said.

After no agreement was reached, the police registered the case, but made no arrests.

The victim was stalked by the men accused of the rape, who threatened to kill her and her family if she refused to drop the complaint, her suicide note said.

Promoted
Listen to the latest songs, only on JioSaavn.com
"They have ruined my life," the note read, Kaur said.
It named two men and a woman who allegedly helped them in the kidnapping. Those men have been arrested, the police said.

UP Man Arrested For Raping Girl For 2 Years On 'False' Promise Of Marriage: Police