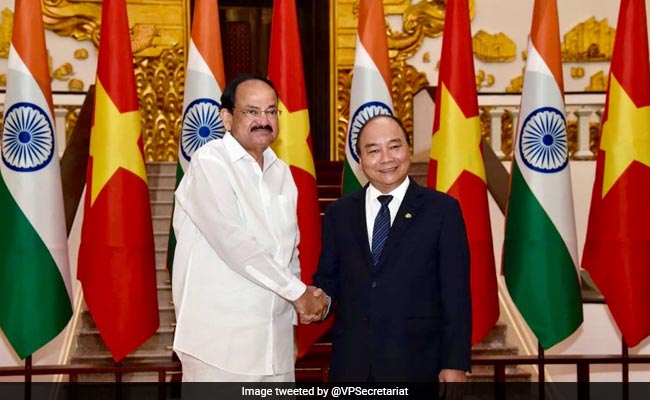 Vice President M Venkaiah Naidu on Saturday held talks with Vietnam Prime Minister Nguyen Xuan Phuc on a wide range of issues and underscored the importance of strengthening the comprehensive strategic partnership between the two nations to ensure peace and security in the Indo-Pacific region.

Vice President Naidu, who is scheduled to deliver the keynote address at the 16th UN Day of Vesak Celebrations on Sunday in Ha Nam province, reiterated during his talks with Mr Phuc that cordial and friendly relations between India and Vietnam have been strengthened by bonds of Buddhism and Hinduism, according to an official statement.

Referring to the growing cooperation between the two nations in different fields, he informed Mr Phuc that India is ready to partner with Vietnam in satellite construction, both for civilian and non-civilian purposes.

On bilateral trade, the vice president expressed confidence of achieving the target of USD 15 billion by 2020.

This will make health services more affordable and reduce the insurance burden on the Vietnam government, he added.

Regarding oil and gas exploration in Vietnam, Vice President Naidu sought an extension of up to 10 years for ONGC Videsh Limited's (OVL) contract, which is due to expire in 2023.

He said OVL has invested over USD 530 million in exploration and exploitation of oil and gas in Vietnam, and is exploring possibility of another gas discovery that may entail additional investment of around USD 136 million.

India's approach and vision to Indo-Pacific is SAGAR -- Security and Growth for All in the Region, he added.

Earlier, inaugurating a 'Jaipur Foot Artificial Limb Fitment Camp' at the Indian Embassy under 'India for Humanity' programme to mark the 150th birth anniversary of Mahatma Gandhi, the vice president said the core philosophy of India from time immemorial has been to share and care.

Stating that the iconic Jaipur Foot provided mobility, a sense of dignity and an ability to live life fully to the differently-abled, Vice President Naidu lauded Bhagwan Mahaveer Viklang Sahayata Samiti for providing the services free of charge.

Earlier in the morning, the vice president visited Ho Chi Minh Mausoleum and paid homage to the Vietnamese revolutionary leader.