Sources said there was no offer, either earlier or now, from the Saudi side to mediate in de-escalating tensions between India and Pakistan. 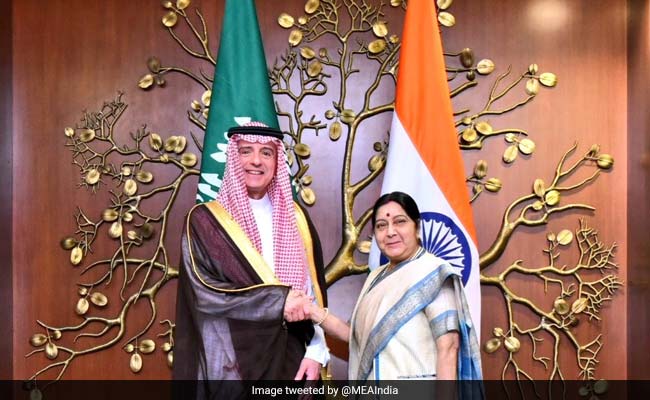 India on Friday conveyed to Saudi Arabia that that an "immediate, irreversible and verifiable action" to dismantle terror infrastructure is essential to fight the menace of terrorism.

This was conveyed during a meeting between External Affairs Minister Sushma Swaraj and Saudi State Minister for Foreign Affairs Adel al-Jubeir, who paid a four-and-a-half-hour visit to India, days after his trip to Islamabad.

Sources, however, said there was no offer, either earlier or now, from the Saudi side to mediate in de-escalating tensions between India and Pakistan.

It is learnt that the recent tensions triggered by the Pulwama attack and India's subsequent air strike on a terrorist training camp in Pakistan also came up during the meeting.

"They (Swaraj and Jubeir) took note of significant developments after the visit of His Royal Highness (Saudi Crown Prince Mohammad bin Salman) to India. EAM reiterated that an immediate irreversible and verifiable action to dismantle terror infrastructure is essential to fight the menace of terror," a Ministry of External Affairs (MEA) statement said, without naming Pakistan or the post-Pulwama tensions between India and Pakistan.

"The Prime Minister thanked the leadership of Saudi Arabia for expressing full solidarity with India in the fight against terrorism in all its forms and manifestations," the MEA said.

"It was agreed that Saudi Arabia and India should work together for irreversible, verifiable and credible steps against all terrorists without any discrimination," it said.

Mr Jubeir briefed Prime Minister Modi on the follow up of the outcomes of the "historical visit" of the Saudi Crown Prince in February 2019.

"Both the countries have taken significant steps including to boost trade and investment and to achieve $100 billion investment from Saudi Arabia into India, which was announced during the visit of the Crown Prince," the statement said.

At her meeting with Mr Jubeir, Ms Swaraj is learnt to have raised the issue of cross-border terrorism and the need for ramping up pressure on Islamabad to take action to dismantle terror infrastructure in that country.

During the meeting, it was agreed to set up the strategic partnership council at the earliest.

The gesture from Saudi side to increase India's Haj quota to 2 lakh and the pardon to 850 Indian prisoners was highly appreciated, the MEA said.

The Saudi minister's visit comes against the backdrop of global efforts to de-escalate tension between India and Pakistan triggered by the suicide attack by JeM in Pulwama on February 14 in which 40 CRPF personnel were killed and subsequent aerial strike by India on a training camp of the Jaish-e-Mohammed (JeM) terror outfit in Balakot on February 26.

Pakistan retaliated the next day by unsuccessfully attempting to target Indian military installations.