BJP chief JP Nadda, who visited Jaipur last week, tried to bridge the gap between Vasundhara Raje and state chief Satish Poonia but party leaders say the two camps have not reached a truce yet. 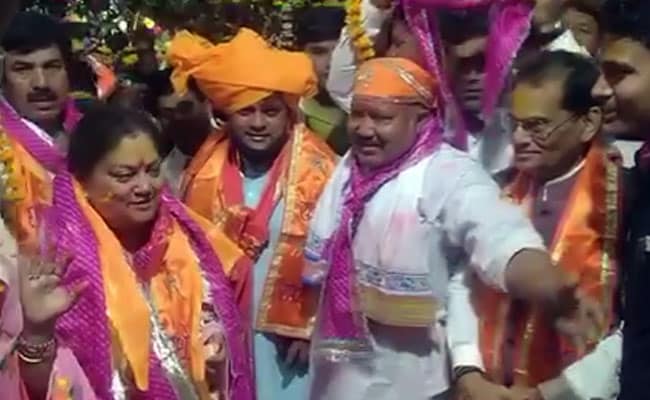 Vasundhara Raje began a two-day yatra in Rajasthan on Sunday.

For her 68th birthday on Monday, Vasundhara Raje has made her resolution abundantly clear: To leave little doubt that the two-time Chief Minister, missing from the political front in Rajasthan for the last few years, is back in active politics.

At a time when the Rajasthan BJP battles infighting between those loyal to her and those with state party president Satish Poonia, a two-day "yatra" of religious sites in the state's Bharatpur region that began on Sunday will be a show of strength and demonstration that can still draw large crowds.

While several former and sitting MLAs including former ministers from her cabinet are part of her yatra, also seen to be active was the Vasundhara Samarthak Manch, an outfit of her supporters from within the BJP active in all districts in Rajasthan.

But missing from her yatra was Mr Poonia who launched his own three-day tour of south Rajasthan on Saturday.

Amid increasing clamour by her supporters that she be given a more active role in state politics, Vasundhara Raje has struck a more conciliatory tone, saying since her mother Vijaya Raje Scindia had "lit a lamp for the BJP", as a founding member, she would ensure it keeps burning on.

A factor of her diminished role since the BJP's defeat in the 2018 assembly elections, an ensuing rift with then party chief Amit Shah and a feud with Satish Poonia, Vasundhara Raje had been absent from the political scene in Rajasthan for the last few years and returned to Jaipur last month after a nearly three-month break in Delhi.

She had skipped many of the BJP's past few meetings, including those held last year at the height of the crisis in the Ashok Gehlot-led Congress government over a rebellion by Sachin Pilot. At the time, Ms Raje's apparent detachment from the BJP's play rankled many in the party.

Her return to the city by road also became a huge display of her might as the route was lined with supporters cheering and shouting slogans for her.

BJP national president JP Nadda, who visited Jaipur last week, tried to bridge the gap between Ms Raje and Mr Poonia but party leaders say the two camps have not reached a truce yet.

On Sunday, addressing a gathering at Puchdi Ka Lota in Bharatpur, Ms Raje said she is the daughter of a woman who had nationalism and the BJP in her blood and called upon her supporters to uproot the "anti-development" government of Ashok Gehlot in the state.