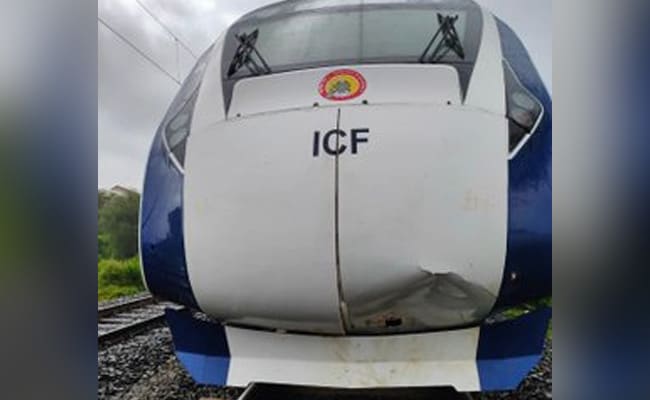 Vande Bharat Express suffered dent in its 'nose' cone, the front bumper made of plastic.

The Vande Bharat Express on the Gandhinagar-Mumbai route hit a cow near Anand station in Gujarat on Friday, a day after the train hit a herd of buffaloes. There was only a dent in the train's front bumper and it had to be halted for 10 minutes, officials said.

In Thursday's incident, the newly launched semi-high-speed train had hit four buffaloes, and its 'nose' cone had come off. It proceeded after an eight-minute halt as damage to the nose — a bumper made of fibre-reinforced plastic — is not essential to the functioning. The animals died.

Railway Minister Ashwini Vaishnaw has said such collisions with cattle are unavoidable and "this has been kept in mind while designing the train". "Its nose on the front is totally replaceable," the minister said earlier today.

Prime Minister Narendra Modi had flagged off the train last month and travelled in it from Gandhinagar till Kalupur railway station in Ahmedabad.

The latest collision place a little before 4 pm near the town of Anand, about 100 kilometres from Gandhinagar and over 400 km from Mumbai.

"The train's front portion has suffered a small dent," Sumit Thakur, chief public relations officer of Western Railway, said, adding that all the passengers were safe.

The train reaches 160 km per hour in just over two minutes, and has better riding comfort than other trains, according to the railways.

Yesterday's collision with buffaloes occurred when the train was on its way back from Mumbai to Gandhinagar, around 11 am, between Batwa and Maninagar, ahead of Ahmedabad.