Uttarakhand's Ranikhet, Almora Cut Off Amid Rain, Fuel Only For Emergency

Uttarakhand Rains Updates: Overall at least 46 people have died in rain-related incidents across the state and Chief Minister PS Dhami has announced Rs 4 lakh compensation for their families

Uttarakhand Rains: Weather department has said conditions will improve from this evening

Uttarakhand's Ranikhet and Almora remain cut off from the plains - and the former was today forced to ration fuel for emergency services - for a second consecutive day, after landslides in the Khairna and Garampani areas blocked roads.

There is little or no fuel available in Ranikhet (around 320 km from Dehradun); what is left has been reserved for emergency services. Low-voltage electricity has been restored after 24 hours, and fibre optic cables (providing telephone and internet services) have been cut in multiple locations.

Visuals shared by the NDRF show entire sections of what were paved roads covered in mud and rubble, with only the metal barrier offering any indication there is a road buried under the debris.

Other photographs show stranded tourists being guided by rescue personnel as they clamber over boulders and through the mud to leave the area. 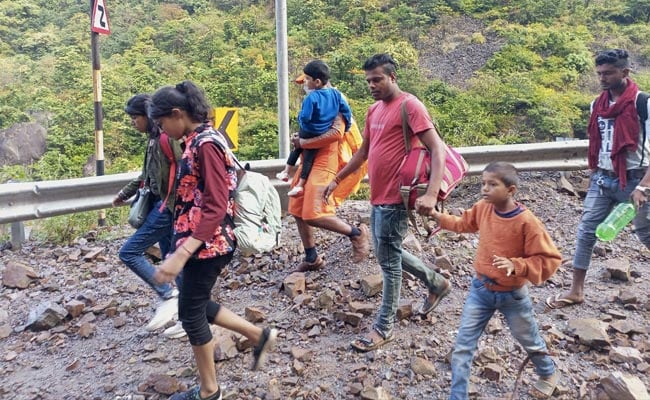 Overall, at least 46 people have died in rain-related incidents across the state; senior police officer Nilesh Anand Bharne told news agency PTI 47 had died, with most deaths (42) in the Kumaon region.

Chief Minister Pushkar Singh Dhami yesterday announced Rs 4 lakh compensation for the families of those killed and Rs 1.9 lakh for those whose houses have been destroyed. Help will also be given to farmers and those who lost livestock to floods and landslides, he said.

Mr Dhami also said he remains in contact with Prime Minister Narendra Modi and Home Minister Amit Shah, and that the centre has promised all possible assistance to the state. 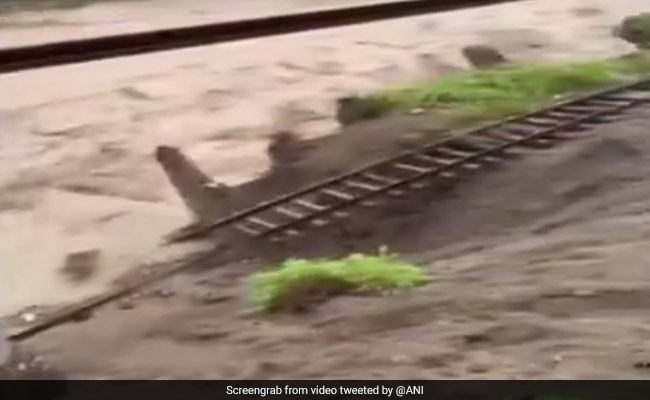 Like Ranikhet and Almora, access to Nainital was cut yesterday after landslides blocked roads. Over 500 mm of rain in 24 hours - also led to the lake overflowing and flooding the Mall Road.

Stranded tourists have now begun to leave; visuals this morning showed men, women and children being evacuated by the NDRF. The tourists were seen walking with their belongings on a hillside. 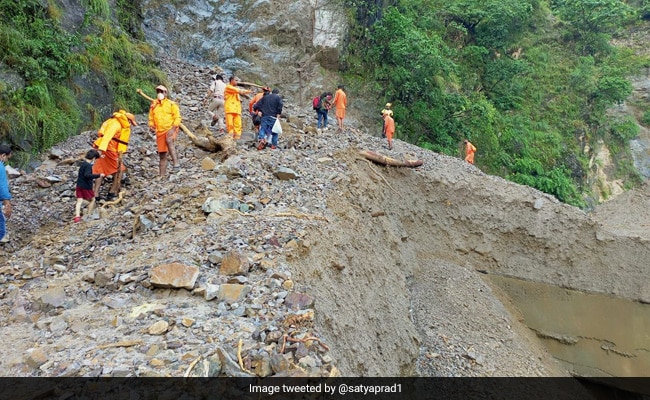 Three Air Force helicopters have been deployed to help in rescue and relief ops; two have been sent to the Nainital region, where additional cloudbursts yesterday caused more damage.

The third is assisting in rescue operations in the Garhwal region.

The rains - which have eased today - led to some frightening and worrying scenes over the past two-three days, with photographs and videos of roads turned into raging torrents, stranded wildlife and people, broken bridges and railway tracks, and submerged buildings widely circulated.

A video from ANI shows people desperately trying to warn a motorcyclist from crossing a bridge, which is beginning to break up, over the Gaula river in Haldwani. Two-three men can be seen and heard shouting to alert the two-wheeler driver who, thankfully, sees the danger and retreats.

What is scarier is the collapse of the bridge itself, which is filmed in the same video. In seconds, the crack in the bridge widens and breaks up the structure, driven by the force of the flooded river.

#WATCH | Uttarakhand:Locals present at a bridge over Gaula River in Haldwani shout to alert a motorcycle rider who was coming towards their side by crossing the bridge that was getting washed away due to rise in water level. Motorcycle rider turned back & returned to his own side pic.twitter.com/Ps4CB72uU9

ANI also shared a video showing the hair-raising rescue of a car.

The vehicle had been washed away in a landslide and had become wedged between some rocks near the Badrinath highway, with powerful water currents threatening to overpower and destroy it.

The car was ultimately pulled to safety by the Border Roads Organisation (BRO).

#WATCH | Uttarakhand: Occupants of a car that was stuck at the swollen Lambagad nallah near Badrinath National Highway, due to incessant rainfall in the region, was rescued by BRO (Border Roads Organisation) yesterday. pic.twitter.com/ACek12nzwF

The state has said water levels are reducing but warned that it could take a few days for the situation to be fully under control. Nevertheless, police have confirmed that the 'Char Dham Yatra', which was halted yesterday, will resume after the final stretch - Joshimath to Badrinath was cleared.

The Himalayan state of Uttarakhand is especially prone to flooding; more than 200 were feared killed in February after flash floods swept away a hydroelectric dam.

With input from ANI, PTI, Reuters