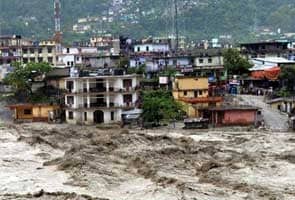 Dehradun/New Delhi: The government today stepped up rescue operations in flood-ravaged Uttarakhand as more rains are predicted for Monday.

The decision was conveyed by Cabinet Secretary Ajit Seth to Prime Minister Manmohan Singh while briefing him about the situation in the state, sources said.

Mr Seth is briefing the Prime Minister in the morning and evening everyday after his meetings with top officials of departments involved in the rescue operations.

The Cabinet Secretary informed the Prime Minister that 66,000 people have already been evacuated by the army, air force, paramilitary forces and others involved in the rescue operations, the sources said. He said that 56 helicopters, including those of army and air force, are conducting 220 sorties per day, evacuating stranded people and distributing the relief material.

The rescue efforts would be stepped up and 500 sorties would be conducted today and tomorrow because more rain is predicted for Monday, the sources said. Around 6,200 personnel of army and about same number of paramilitary forces are working day and night to rescue stranded people.

Promoted
Listen to the latest songs, only on JioSaavn.com
40,000 km area of the state, particularly Gaurikund and Govind Ghat, have been affected by the devastating floods. 36,000 LPG cylinders have been sent to the state.