Uttarakhand Floods: Amid the chaos, an under-construction bridge over the Chalthi river in the Champawat district has been washed away due to a rise in water levels.

Uttarakhand Floods: A car was swept away by the stream and precariously caught between two boulders.

Heavy rainfall in Uttarakhand for the third consecutive day has led to chaos and disaster across the hilly state, with flooded roads and buildings, destroyed bridges and overflowing water bodies leaving locals and tourists stranded - some in remote and dangerous locations.

34 people have been reported dead, including labourers from Nepal who were buried alive by rubble, and people from Champawat district where a house collapsed after a landslide. The casualties have left authorities fearing for the lives of people who may be trapped under debris.

Amid the chaos, the Nainital lake has overflowed, an under-construction bridge over the Chalthi river has been washed away due to a rise in water levels, and a car with passengers inside got caught between two boulders in the middle of a swollen stream.

India Meteorological Department (IMD) issued a red alert for Uttarakhand with a forecast of heavy to very heavy rainfall in the state on Monday.

In what will come as some relief going forward, the weather department has indicated a "significant reduction in rainfall activity over Uttarakhand from today", predicting "isolated to scattered" showers.

Here are the Highlights on the Uttarakhand Rains and Floods:

Oct 20, 2021 03:15 (IST)
'Char Dham Yatra', On Halt Due To Rains, To Resume Today: Police
'Char Dham Yatra', which was halted due to incessant rain in Uttarakhand, will resume from Wednesday, news agency ANI quoted the state police as saying.
After attending a review meeting with Chief Minister Pushkar Singh Dhami on Tuesday in Nainital, Director-General of Police Ashok Kumar told ANI, "Garhwal is almost under control, even the 'Yatra' has been started there. Leaving the last stretch of Badrinath i.e., Joshimath to Badrinath has been opened and 'Char Dham Yatra' will completely revive tomorrow."
Oct 19, 2021 22:58 (IST)

Due to heavy rains and landslides in Almora, 7 people have been reported dead since last night. A house in Raapad village, Bhikiyasan was hit by a landslide last nigth, killing 4 people living in the house, while a woman was rescued by the villagers: PIB, Uttarakhand

Prime Minister Narendra Modi After 34 Dead In Uttarakhand Rains: Anguished By Loss Of Lives
Prime Minister Narendra Modi has expressed anguish over the death of 34 people due to heavy rainfall in Uttarakhand and said rescue operations are underway after landslides and flash floods engulfed several structures in the hill state.
Oct 19, 2021 20:57 (IST)
Update: 34 Killed, 5 Missing Amid Heavy Rains In Uttarakhand
Uttarakhand Chief Minister Pushkar Singh Dhami said, "So far 34 people have died and five are missing. Rs 4 lakh compensation will be given to the families of the deceased. Those who lost their houses will be given Rs 1.9 lakh. All possible help to be extended to those who lost their livestock," he said.
Oct 19, 2021 20:00 (IST)

Oct 19, 2021 18:59 (IST)
Update: 22 Dead As Rain Batters Uttarakhand
At least 22 people are dead as heavy rainfall battered Uttarakhand for a third straight day today, leaving authorities fearing for the lives of many more who may be trapped under debris and in flooded areas. Read more.
Oct 19, 2021 17:21 (IST)

#WATCH | A portion of the railway line connecting Kathgodam and Delhi near Gaula river in Uttarakhand's Haldwani was damaged earlier today amid heavy rainfall in the region. pic.twitter.com/onYhSwhdlK

Oct 19, 2021 17:12 (IST)
Arvind Kejriwal asks Aam Aadmi Party workers to help people in Uttarakhand
With incessant rain wreaking havoc in various parts of Uttarakhand, Delhi Chief Minister and AAP national convenor Arvind Kejriwal asked his party workers in the state to help people in every possible way.
"Distressing news about damage caused by calamity is coming from Uttarkhand. I pray to Baba Kedarnath for everybody's safety. Appeal to all workers of the Aam Aadmi Party to help people in every possible way in this difficult time," Mr Kejriwal tweeted in Hindi.
Oct 19, 2021 16:41 (IST)
Uttarakhand Chief Minister conducts aerial survey of rainfall affected areas
Uttarakhand Chief Minister Pushkar Singh Dhami conducted an aerial survey of areas affected due to heavy rainfall. Later, the state chief minister also reviewed the assessment of losses caused by incessant rainfall after reaching Rudraprayag in Uttarakhand.
Uttarakhand Cabinet Minister Dhan Singh Rawat and the state's Director General of Police Ashok Kumar also accompanied him.
Oct 19, 2021 16:12 (IST)
Dry weather likely to prevail in Uttarakhand for next three days: Weather Department
Dry weather is likely to exist in Uttarakhand and its adjoining areas over the next three days, said the India Meteorological Department. This news pours in after torrential rainfall wrecked the state of Uttarakhand over the past few days.
In a tweet, the weather agency wrote, "Significant reduction in rainfall activity likely over Uttarakhand from today, 19 October 2021."
"As predicted rainfall activity has reduced significantly over northwest and adjoining central India from today. However, due to western disturbance and its interaction with easterlies at lower levels, fairly widespread rainfall with isolated heavy rainfall very likely over Uttarakhand on today and dry weather subsequent 3 days," the tweet read.
Oct 19, 2021 15:53 (IST)

"...Some people are trapped in Joshimath due to landslides. Gujarat CM spoke to Uttarakhand CM on the current situation. Both the States are working together to evacuate people as soon as possible." Rajendra Trivedi, Gujarat Disaster Management Minister added

Uttarakhand Rains: Nainital Cut Off From Rest Of State With Roads Blocked
Incessant rains continued to lash various parts of Uttarakhand today, especially the Kumaon region, razing houses to the ground and leaving many trapped in the debris.

Nainital was cut off from the rest of the state with three roads leading to the popular tourist spot blocked due to a series of landslides.

Sixteen people have been reported dead, including labourers from Nepal who were buried alive by rubble, and people from Champawat district where a house collapsed after a landslide. The casualties have left authorities fearing for the lives of people who may be trapped under debris.

"Prime Minister Modi and Home Minister Shah have been briefed on the situation. Houses, bridges etc. have been damaged and 16 people have died so far. Three (Army) helicopters to be deployed for rescue operations," Chief Minister Pushkar Singh Dhami was quoted by news agency ANI.

Uttarakhand Rains: Video Of Elephant Stranded In Rain-Battered Uttarakhand Rescued
Ten teams of the National Disaster Response Force (NDRF) are on duty in the state. NDRF chief Satya Pradhan tweeted some photos and videos this morning that showed rescue personnel in action in the rain-battered town of Rudraprayag.

While many such videos are being shared on social media, a clip of an elephant stranded in the raging flood at Nainital near the Jim Corbett Park went viral earlier today.
Oct 19, 2021 13:29 (IST)
Uttarakhand Rains: State Disaster Response Force conducts overnight rescue operations
The State Disaster Response Force (SDRF)  in Uttarakhand has teams conducting overnight rescue operations, amid a flood-like situation triggered by heavy rains in the state.

The SDRF said that today was very challenging due to incessant heavy rain. The calls for rescue kept on coming throughout the night and a quick response was given by the teams. 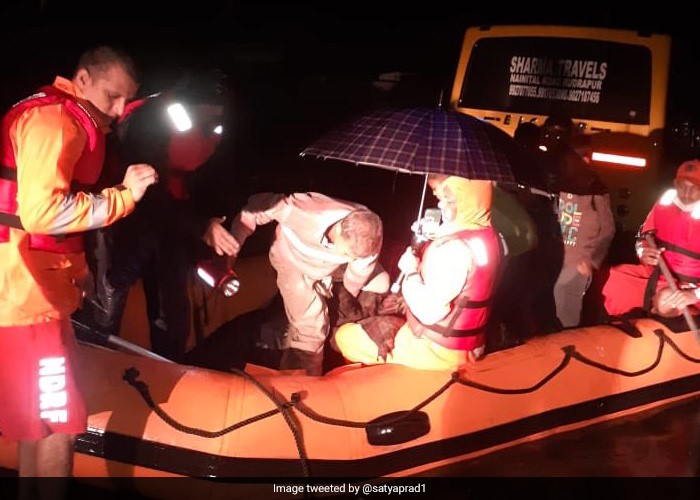 Oct 19, 2021 12:17 (IST)
Uttarakhand Rains: People feared trapped under debris after a sudden heavy rainstorm ("cloudburst") in a village in Nainital

Uttarakhand: An incident of cloudburst reported in a village of Ramgarh in Nainital district. People feared trapped under the debris. Teams of Police and administration rushed to the spot. Details awaited. pic.twitter.com/B1qTzUIzZI

Around 100 people were stuck at Lemon Tree Resort (in pics) located at Ramnagar-Ranikhet route. All of them are safe & process to rescue them is on. Water from Kosi River entered the resort after the river overflowed, blocking the route to the resort: Uttarakhand DGP Ashok Kumar pic.twitter.com/2UUmWJaaYR

Oct 19, 2021 11:53 (IST)
Uttarakhand Rains: Visuals of overflowing rivers and flooded roads
As heavy rains hit Uttarakhand hard these past three days, the state has come to be completely flooded, as the Nainital lake overflows and Chalthi river overpowers and washes away an under-construction bridge. 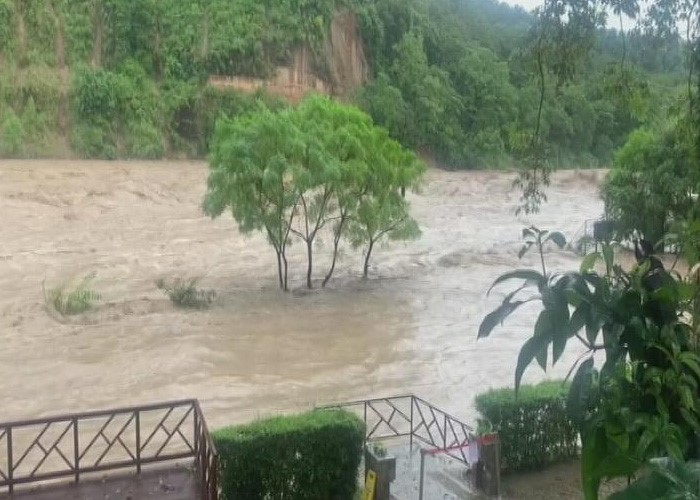 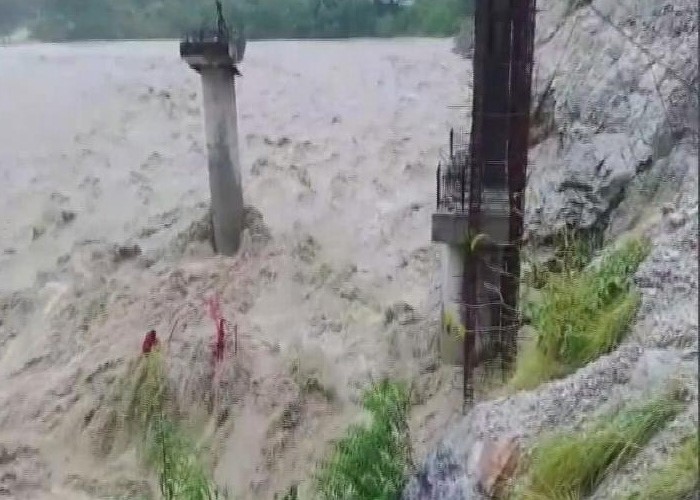 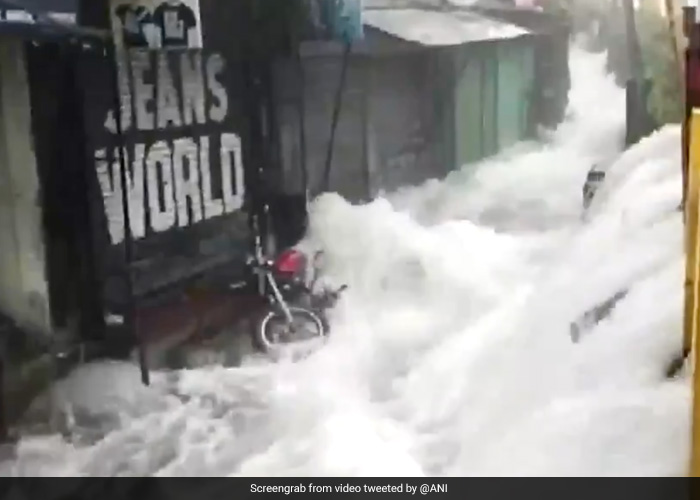 I'm here somewhere near Ranikhet. Incessant rains since last 2 days. No electricity since morning. Mobile working so far. Huge tree fell & blocked the road just 100 meters away from where I'm staying. Main roads blocked at places. Seems can't get back at least for next few days. https://t.co/r4WPw8v30rpic.twitter.com/qpedalwxF5

Watch: Dramatic Rescue As Car Stuck Between Rocks In Uttarakhand Rain
A car, with passengers on board, was pulled to safety by the Border Roads Organisation (BRO) after it got stuck in a landslide in Uttarakhand on Monday.
The car, precariously perched between two boulders, with powerful water currents passing underneath it, lurched, swayed and was finally dragged to safety by an earthmover, rescuing the occupants that were stuck at the swollen Lambagad Nallah near Badrinath National Highway.
Oct 19, 2021 11:19 (IST)
Uttarakhand Rain: Nainital Lake overflows and floods the streets

Uttarakhand Floods: 4 Dead As Rain Batters Uttarakhand, Pictures, Videos Show Flooding, Damage
Heavy rainfall in Uttarakhand over the past three days has led to scenes of chaos and disaster across the hilly state, with flooded roads and buildings, destroyed bridges and overflowing rivers leaving locals and tourists stranded - some in remote and dangerous locations.
At least four people have been killed so far,  including labourers from Nepal who were staying near Lansdowne in Pauri district when rubble flowing down from a field above buried them alive, District Magistrate Vijay Kumar Jogdande said.

Some were also killed after their house collapsed in Champawat district, where an under-construction bridge (over the Chalthi river) has been washed away due to a rise in water levels.

#WATCH | An under construction bridge, over a raging Chalthi River in Champawat, washed away due to rise in the water level caused by incessant rainfall in parts of Uttarakhand. pic.twitter.com/AaLBdClIwe