How Samajwadi Party Leader, Dressed Up As Groom, Tried To Hoodwink Cops

Firoz Khan, Samajwadi Party leader from Sambhal, wore a sehra or headdress and disguised himself as a groom to evade the police. 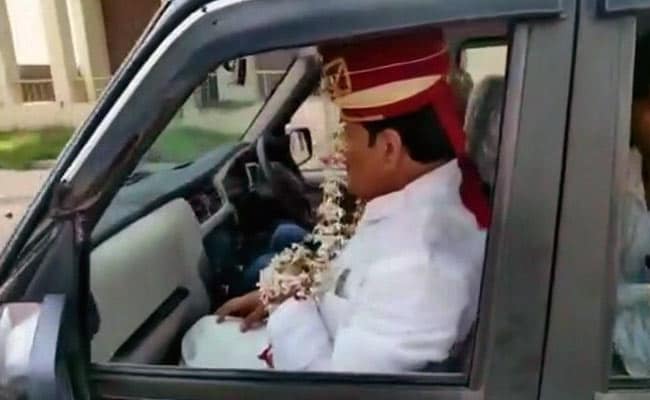 Samajwadi Party leader Firoz Khan wore a sehra and disguised himself as a groom.

A Samajwadi Party leader thought of a unique idea to dodge the police which have imposed prohibitory orders in Uttar Pradesh's Rampur.

Firoz Khan, party leader from Sambhal, wore a sehra or headdress and disguised himself as a groom to dodge the police, reported news agency ANI. He was on his way to meet senior party leader Azam Khan against whom multiple FIRs have been registered.

Police has tightened the security and imposed Section 144 (prevention of unlawful assembly) ahead of party chief Akhilesh Yadav's visit to meet Mr Khan.

Samajwadi Party leader from Sambhal,Firoz Khan wore a groom's 'sehra' to dodge Police which has imposed section 144 in Rampur. Firoz Khan had come to Rampur to extend support towards senior party leader Azam Khan against whom multiple FIRs have been lodged. (13.9.19) pic.twitter.com/21THkDaPGI

Azam Khan, the Lok Sabha MP from Rampur, is facing several police cases, related to land grabbing. Authorities have claimed the gate of his Mohammad Ali Jauhar University, established by him in 2006, is built on a government land.

"Our party leader MP Azam Khan is been targeted by the government. Over 80 cases have been lodged against him within a month. These cases include goat and buffalo theft," Mr Yadav said.

"All these are baseless charges... Rampur district administration and police are working on the directives of the state government but the people are with Azam Khan," he added.

Mr Yadav said Azam Khan only wanted to secure the future of the next generation by setting up a university.