With 1 Doctor Every 20,000 Patients, UP Government Hospitals Need Care

A primary health centre or rural hospital in Barabanki just 50 km from Lucknow, which is supposed to function 24x7 and serve almost one lakh people, was locked when NDTV visited.

The Uttar Pradesh government says it is trying to improve things

At the elite, specialised government hospital in Firozabad town, western Uttar Pradesh, the biggest government health facility in the area, not a single ultrasound has been performed in the last 24 hours. There is just one radiologist at the hospital and he has fractured his hand - meaning all the patients are being forced to go to expensive private hospitals.

Ideally, a government hospital at this level should have at least 5 doctors, who can perform ultrasounds.

"We had two doctors earlier. One retired last year... We are trying to minimise inconvenience to patients. The doctor who is hurt, hopes to be back soon," says Dr RK Pandey, the Chief Medical Officer of Firozabad.

Across the state, glaring gaps in infrastructure, manpower and delivery mechanisms in government hospitals have led to UP placing at the bottom of the country's health rankings again.

A NITI Aayog Report released on Tuesday places Uttar Pradesh at rank 21, the worst among large states. According to it, the state has worsened, remained static or improved ever so slightly on crucial health parameters in the last 5 years.

One reason for these abysmal figures is a critical shortage of infrastructure and manpower at rural hospitals that provide frontline health services to the poor. 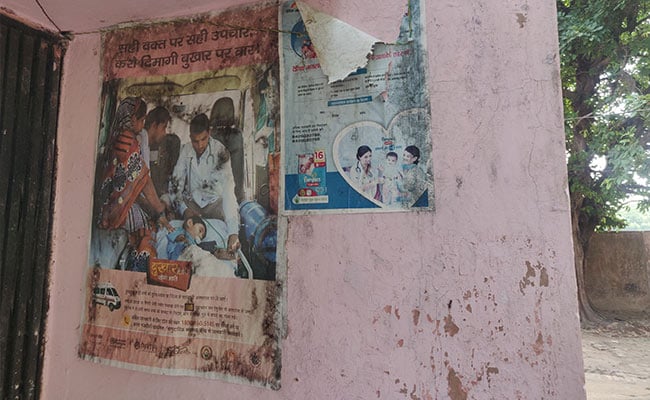 A primary health centre or rural hospital in Barabanki just 50 km from Lucknow, which is supposed to function 24x7 and serve almost one lakh people, was locked when NDTV visited.

Pharmacist Ram Bharak, who reached a while later when he got to know of our presence, said it is impossible to run the centre round the clock with just one allopathic doctor, one ayurvedic doctor and one pharmacist. There's no ward boy even.

"We come in for emergencies from our homes after 2 pm. If there is one thing I want to see improved right now, it is that we should be given more staff," Mr Bharak told NDTV.

Uttar Pradesh has one government doctor for 19,962 patients. The figure is second only to Bihar, where the corresponding figure is 28,391. The national average is one doctor for 11,082 people.

The Uttar Pradesh government says it is trying to improve things.

Government figures indicate the sanctioned strength of government doctors in the state is 18,732. When Yogi Adityanath became chief minister in 2017, the state was short of 7,000 doctors. The government says they have recruited 2532 new doctors till now.

"We have inherited certain things from the governments that came before 2017. We inherited their failure and tried to improved it as much as we can. We did make many improvements," claimed Siddharth Nath Singh, Health Minister in the Uttar Pradesh government.