Uttar Pradesh Elections: "Their party flags may be different, but their heart is one," BJP leader and Deputy Chief Minister Dinesh Sharma said, attacking the rival parties. 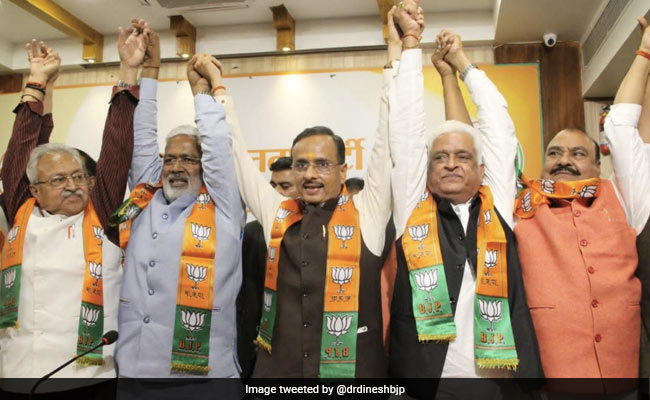 The "deadly cocktail" of the SP, BSP and Congress wants to put a brake on the works Prime Minister Narendra Modi and Chief Minister Yogi Adityanath did for the welfare of the poor, but the people of Uttar Pradesh will not let them succeed, the BJP said Sunday.

"Their party flags may be different, but their heart is one," BJP leader and Deputy Chief Minister Dinesh Sharma said, attacking the rival parties.

Addressing a meeting of BJP's NGO cell, he said, "The Congress is the 'sutradhaar' (one who controls) of all these parties. The aim of these political parties is the same, and their malicious intentions cannot be allowed to be fulfilled. For this, the organisational strength of the party (BJP) has to be increased."

He added the BJP's presence in the state is increasing further with new people joining the party. “They have to be adopted, and their services have to be availed by the party.”

Mr Sharma urged party workers to "loudly" publicise the work done by the government for the public and also "expose" the opposition.

"For 15 years, these parties ran governments based on casteism and communalism, and differences have been created among people. The earlier governments were known for their internal differences, and during their tenure, there were riots in the state, and imposition of curfew was very common.

"However, in the past four-and-half years, the anti-social elements never had the audacity to trigger riots in the state," Mr Sharma said.

The deputy chief minister also mentioned the various achievements of the BJP government.

"The upcoming Assembly elections are to save the country, and to build a new Uttar Pradesh. This is a mission. The previous governments had pushed UP to the bottom of the list in terms of implementation of the Centre's projects. But, in the past four-and-half years of the BJP government, UP is number one in implementation of 44 schemes," he said.

Speaking on this occasion, state BJP chief Swatantra Dev Singh, said, "The deadly cocktail of SP, BSP and Congress wants to put a brake on the works of governments of Narendra Modi and Yogi Adityanath pertaining to the welfare for the poor.

"But, the 24 crore people of UP will not allow their intentions to be successful. They (rival parties) are not bothered about the welfare of the poor, deprived and the oppressed sections of the society, but are bothered to fill their own pockets.”

"And this is the reason that all of them want to stop the BJP," Mr Singh said, and added the people will once again bless the BJP, and the party will form a government in the state.