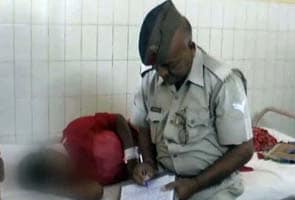 Basti, Uttar Pradesh: In another setback for the Mayawati government, and adding to the long list of rape cases, a Dalit woman was raped and stabbed barely 50 metres from the DIG's residence in the Basti area of Uttar Pradesh.

After raping her, the three men repeatedly stabbed her on the terrace of a government quarter in the district. One of the main accused Ajay Chaudhary is the driver of a senior government officer, who stays in one of the quarters.

The woman is critical, and is being treated in the district hospital. Police have lodged a case of rape.

"Poonam mentioned that somebody misbehaved with her. There are a few blade marks also on her. A case of rape has been registered and we have constituted teams to look for the accused," said Rajesh Modak, SP, Basti.