US Warns India Of "Consequences" Over Avoiding Sanctions On Russia

Visiting US Deputy National Security Adviser Daleep Singh, referring to the "no limits" partnership between Moscow and Beijing, said India should not expect Russia to come to its defence in case China violates the Line of Actual Control (LAC). 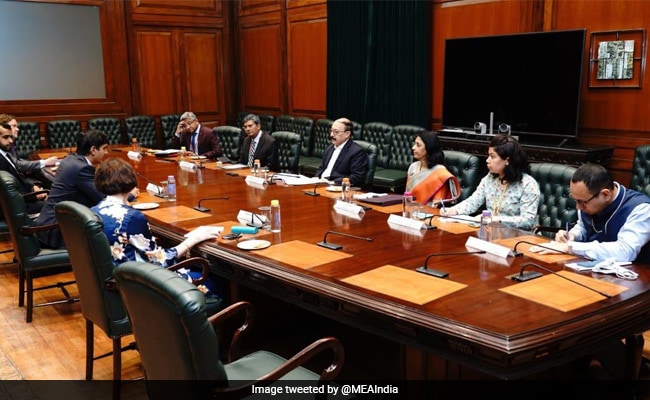 The US on Thursday cautioned that there will be consequences for countries actively attempting to "circumvent or backfill" American sanctions against Moscow for its invasion of Ukraine and said it would not like to see a "rapid" acceleration in India's import of energy and other commodities from Russia.

Visiting US Deputy National Security Adviser Daleep Singh, referring to the "no limits" partnership between Moscow and Beijing, said India should not expect Russia to come to its defence in case China violates the Line of Actual Control (LAC).

After holding a series of meetings with Indian interlocutors including Foreign Secretary Harsh Vardhan Shringla, he also said that the US would not like to see any country engaging in financial transactions with the Russian central bank.

Mr Singh said India's current import of Russian energy doesn't violate any of the American sanctions, but at the same time added that Washington would like to see its allies and partners find ways to reduce their reliance on an "unreliable supplier".

The US Deputy NSA, who played a key role in designing American sanctions against Russia, arrived in New Delhi on Wednesday on a two-day visit in the backdrop of increasing disquiet among Western powers over India not criticising Russia over its attack on Ukraine.

"We would not like to see mechanisms that are designed to prop up the rouble or to undermine the dollar-based financial system or to circumvent our financial sanctions," he told a small group of reporters.

His comments came on a day Russian Foreign Minister Sergey Lavrov arrived in India on a two-day visit that could see discussions on a Rouble-Rupee payment mechanism for bilateral trade including New Delhi's purchase of Russian Oil.

"What we would not like to see is a rapid acceleration of India's imports from Russia as it relates to energy or any other any other exports that are currently being prohibited by the US or by other aspects of the international sanctions regime," he said.

Mr Singh was asked about India's decision to purchase discounted oil from Russia.

There was no response from the government to the remarks made by the US Deputy NSA.

"I come here in a spirit of friendship to explain the mechanisms of our sanctions, the importance of joining us to express shared resolve and to advance shared interests. And yes, there are consequences to countries that actively attempt to circumvent or backfill these sanctions," he said.

He said the US stands ready to help India in meeting its requirement of energy and defence equipment.

"So the conversation I've had here is that we stand ready to help India diversify its energy resources, much like is the case for defence resources over a period of time," he added.

Referring to cooperation under the Quad framework, Singh said there has been a recognition in the coalition that China is a strategic threat to a free, open and secure Indo-Pacific.

"If you set that against the reality that China and Russia have now declared a no limits partnership, and that Russia has said that China is its most important strategic partner, by extension, that has real implications for India," Mr Singh said.

He said Russia is going to be the junior partner in this relationship with China and suggested that such a partnership would be detrimental to India's interests.

"And the more leverage that China gains over Russia, the less favourable that is for India. I don't think anyone would believe that if China once again breaches the Line of Actual Control, Russia would come running to India's defence," he said.

"And so that's the context in which we really want the democracies across the world, and specifically the Quad, to come together and voice their shared interests and their shared concerns about the developments in Ukraine and the implications for the Indo-Pacific," Singh said.

The US Deputy NSA said the impact of the Russian aggression if not checked will be devastating.

"Think of the chilling effect that would cause the uncertainties that would be raised, the signal that would be sent to autocrats all over the world that might wish to exert their own sphere of influence, bully their neighbours, perhaps right on India's doorstep. And those are costs that we are not willing to accept," he said.

Asked about possible consequences of an attempt to circumvent the sanctions, Singh said "that's the subject of private discussions that I am not going to share publicly." Singh said the US is having an "honest dialogue" with the Indian government officials on the Ukraine crisis.

"And (Vladimir) Putin is violating all of those principles. And that's why we're imposing these sanctions. That's why we're supporting Ukraine's fight for freedom," Mr Singh said.

The US official said the democracies must stand up to protect the core principles that underpin peace and security all over the world.

"And when democracies don't stand up in solidarity and defend those principles together, the costs and risk to all of us become that much larger," he said.

"So it is critical that we move in as broad a coalition as possible because this is not a unilateral exercise in brute American force. That's not what this is," he added.

"I realise there are consequences, consequences from Putin's needless war of choice. You see them in energy prices here in India and certainly in the US and all over the world.

"You see them in food prices, refugee flows, trade disruptions. But it's important not to forget the root cause of those consequences is Putin's war. And in our judgement, if dictators don't pay a price for their aggression, they continue to sow chaos all over the world," he said.