US State Department's spokesperson Morgan Ortagus said that the relations between India and the US are "really important" to the defence and security establishment of the two countries. 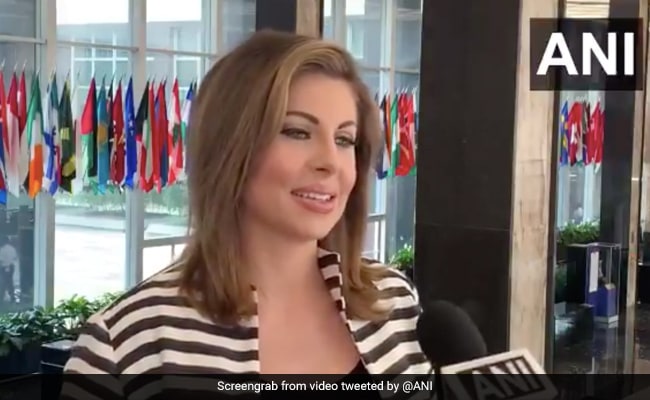 The two countries have reaffirmed they are committed to free and open Indo-Pacific region: Morgan Ortagus

Underlining that India and US relations go beyond political parties, the State Department on Wednesday said that Washington needs New Delhi's partnership to face many global challenges and to solve "big problems" on the world stage.

US State Department's spokesperson Morgan Ortagus while speaking to ANI, said that the relations between India and the US are "really important" to the defence and security establishment of the two countries in the era of global competition as well as to ensure freedom of navigation and freedom of the seas.

Referring to India as one of the "selective partners" of the United States, Ortagus said that it was an "incredibly important" for Pompeo and Esper to go to India and have 2+2 dialogue.

The timing of the secretaries' visit holds significance as the US is going into the presidential election next week.

"One of the reasons why this 2+2 dialogue is so important is India has really emerged on the global stage and in fact that we know there are many global challenges that the United States faces. We cannot face them alone. We recognise that we need India. We need the partnership in order to solve any of these big problems on the world stage," she said.

"Well, it's incredibly important for secretary Mike Pompeo and Secretary Esper to go to India to have this two plus two. You know, the relationship between the United States and India has been around for a very long time. It will be around for much longer in the future. The relationship goes beyond political parties, this relationship between the United States and India is important to everybody and our defence and security establishment, so you know we have many friends and allies of course around the world. But we have very selective partners like India, where we actually take the time to do the 2+2," she added.

Ms Ortagus said that the two countries have reaffirmed that they are committed to the free and open Indo-Pacific region and that is "really important" in the era of global competition.

"So we know that both of our countries reaffirmed that we are committed to the free and open Indo-Pacific, and that''s really important as we enter this era of global competition. One of the things that are going to be crucial and fundamental is freedom of navigation, freedom of the seas, free flow of trade of goods, and exchange of ideas," Ms Ortagus said.

During 2+2 dialogue, India and US welcomed the growing understanding on the Indo-Pacific among like-minded countries and emphasized that the Code of Conduct in the South China Sea should not prejudice the legitimate rights and interests of any nation in accordance with international law.

A Joint Statement on the third India-US 2+2 Ministerial Dialogue said the two countries reiterated their commitment to maintaining a free, open, inclusive, peaceful, and prosperous Indo-Pacific region built on a rules-based international order.

India and US signed five key agreements during the 2+2 India-US ministerial-level dialogue including Basic Exchange and Cooperation Agreement (BECA) which will allow India real-time access to precision data and topographical images from the United States military satellites.