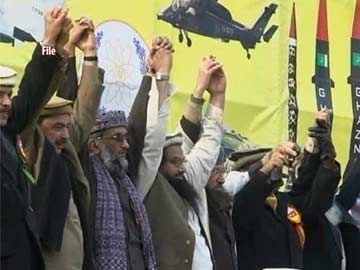 Washington: Tightening its noose around the Lashkar-e-Taiba (LeT), the US on Wednesday added its affiliates, including the Jamaat-ud-Dawa (JuD), to its list of designated terror organisations and slapped sanctions against two Pakistan-based LeT leaders.

Simultaneously, the Department of the Treasury targeted the financial and leadership networks of LeT by designating Nazir Ahmad Chaudhry (Ahmad) and Muhammad Hussein Gill as Specially Designated Global Terrorists (SDGTs).

Ahmad and Gill are being designated for acting for or on behalf of LeT, a terrorist organisation based in Pakistan.

Treasury and the Department of State have designated 22 individuals and four entities associated with LeT.

"We will continue to target LeT's financial foundation to disrupt and impede its violent activities," he added.

The LeT was responsible for the deadly November 2008 terrorist attack in Mumbai that claimed 166 lives and injured more than 300.

Ahmad has been a senior leader of the LeT since the early 2000 and has served as its vice-president, member of the group's central leadership and as close aide of its leader Muhammad Saeed.

Ahmad directed the group's public relations department for at least ten years and as of 2012 was the head of LeT's information wing.

Ahmad has also been a key strategist for the group and has been involved in LeT operational finance matters.

Gill is a senior LeT shura member and was a LeT founder.

He has been an accountant for LeT for more than ten years and has served as its chief financial officer and headed its accounts department for several years.

Promoted
Listen to the latest songs, only on JioSaavn.com
He also has served in LeT's revenue wing and has maintained its expense records.

"As a result of today's (Wednesday) action, all property and interests in the United States or in the possession or control of US persons in which Ahmad and Gill have an interest are blocked and US persons are prohibited from engaging in transactions with them," the Treasury said.