US knows I am incorruptible: Modi on WikiLeaks 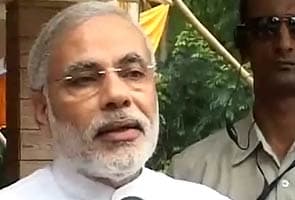 Gandhinagar: Gujarat Chief Minister Narendra Modi today said that the US should not preach to India about human rights violations.

He was reacting to a WikiLeaks cable that has been released which refers extensively to him. Mr Modi stressed that the cable acknowledges him as "incorruptible" and refers to Gujarat as "a progressive state."

Dated November 2, 2006, the cable sent by Michael S Owen, the Consul General in Mumbai, refers to Mr Modi's growing potential as a national leader for his party. Mr Owen writes about the need to engage with the Chief Minister to serve America's concerns and messages about human rights. (Read entire cable)

Mr Modi said today that at a meeting with Mr Owen in 2006, he "looked into Mr Owen's eyes and said America should not give us advice on human rights."

Mr Modi says he told Mr Owen that "I am a son of India and I know what human rights violations you have done."

In his cable, the then Consul General wrote, "We believe that Modi's rise in the BJP seems likely. In coordination with Embassy New Delhi, we intend to continue our policy of interaction with the Chief Minister, whose B1/B2 visa we revoked in 2005.. Such interaction allows us to deliver a clear message on human rights and religious freedom directly to the source. It will also shield us from accusations of opportunism from the BJP that would invariably arise if we ignored Modi now but sought a dialogue with him in the likely event that he makes it to the national stage.

Promoted
Listen to the latest songs, only on JioSaavn.com
Mr Owen praises the Chief Minister, stating, "Modi has successfully branded himself as a non-corrupt, effective administrator, as a facilitator of business in a state with a deep commercial culture, and as a no-nonsense, law-and-order politician who looks after the interests of the Hindu majority."

That assessment appeals to Mr Modi who said today, "America has shown me incorruptible. There are many non- corrupt people, but they have termed me incorruptible, which is good for the people of Gujarat. Wikileaks shows two faces - that of the  Government of India and another of progressive Gujarat."