The exercise is planned for a duration of three weeks wherein personnel will exercise and hone their skills in maritime interdiction operations, direct action missions, combat free fall jumps and special heliborne operations. 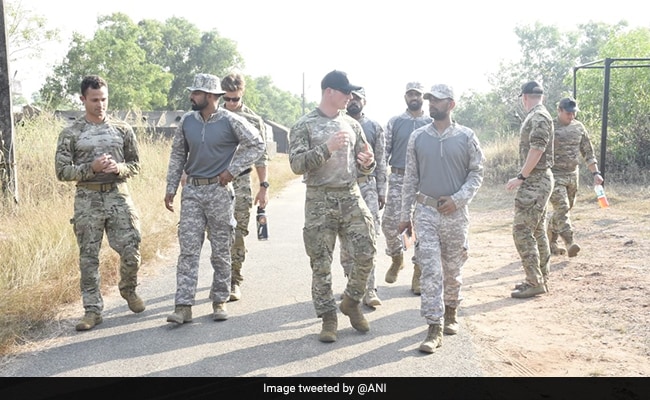 Exercise Sangam was first conducted in 1994.

The 7th edition of Exercise Sangam, a joint Naval Special Forces exercise between Indian Navy MARCOs and US Navy SEALs commenced in Goa on December 1, the Ministry of Defence said.

Exercise Sangam was first conducted in 1994 and is an important military and diplomatic initiative between the two nations, reflective of the trust and friendship between them.

According to the Defence Ministry statement, the present edition which will see personnel from SEAL Team Five based at San Diego, US and Indian Navy MARCOs from INS Abhimanyu together aims at exchange of ideas and experiences on various aspects of maritime special operations.

Whilst a joint exercise among US SEALs, MARCOs and other participating nations' Naval Special Forces is held annually as part of Exercise Malabar, the Sangam series is a bi-lateral exercise purely between the US and Indian Special Forces.

The exercise is planned for a duration of three weeks wherein personnel will exercise and hone their skills in maritime interdiction operations, direct action missions, combat free fall jumps, special heliborne operations and various other evolutions.

Exercise Yudh Abhyas is conducted annually between India and USA with the aim of exchanging best practices, tactics, techniques and procedures between the Armies of the two nations. The previous edition of the exercise was conducted at Joint Base Elmendorf Richardson, Alaska (USA) in October 2021.

US Army soldiers of the 2nd Brigade of the 11th Airborne Division and Indian Army soldiers from the ASSAM Regiment participated in the exercise. The training schedule focuses on employment of an integrated battle group under Chapter VII of the UN Mandate.

The exercise includes all operations related to peacekeeping and peace enforcement. The troops from both nations will work together to achieve common objectives.

The joint exercise also focuses on Humanitarian Assistance and Disaster Relief (HADR) operations. Troops from both nations practiced in launching swift and coordinated relief efforts in the wake of any natural calamity.

India US naval drillsIndia US