UP Priest Faked Attack On Himself With Hired Gunman To Frame Rival: Cops

The police claimed that that the chief monk of the temple, the village head and the injured priest had made the plan to carry out the attack.

Seven, including the chief monk of the temple and a village head, have been arrested.

A conspiracy by a temple priest and others in Uttar Pradesh's Gonda district was busted by the police on Saturday, who said the accused hired a professional shooter and orchestrated an attack on himself to frame a political rival. Seven people, including the chief monk of the temple and a village head, have been arrested over the attack on the priest who too will be arrested once he is released from the hospital, the police said.

The priest Atul Tripathi alias Samrat Das, who was injured in the attack last week is currently at the King George's Medical College Hospital in Lucknow, they said.

The police claimed that Mahant Sitaramdas of the temple, the village head and the injured priest had hatched the plan to carry out the attack.

The incident had sparked a huge row and the state government faced intense criticism. Saints from Ayodhya had also camped in the district and demanded prompt action against those responsible.

In a joint press conference, District Magistrate Nitin Bansal and Superintendent of Police Shailesh Kumar Pandey said that Mr Das was injured when he was shot at on the night of October 10 in Shri Ram Janki Temple in the village. 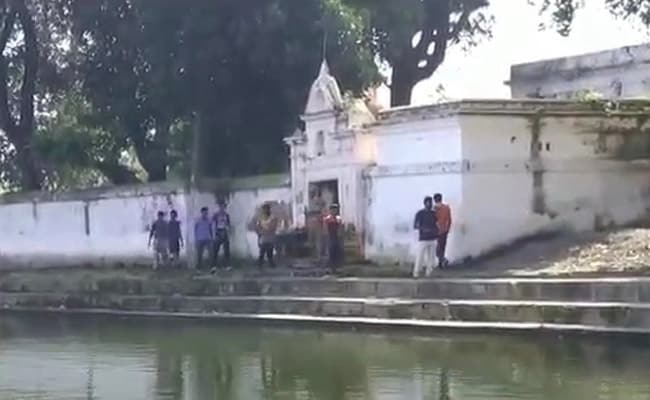 A case of murder attempt was filed by Mahant Sitaramdas of the temple against a former village head Amar Singh and his associates, two of whom were arrested the next day. Amar Singh was not found.

Five teams were constituted for solving the case and based on electronic evidence, statements of witnesses and other inputs, seven accused were arrested on Friday and efforts were on to catch one other person who is still on the run, the district police chief said.

Three country-made revolvers, seven live cartridges, one empty cartridge and a mobile phone were recovered from them, he said.

The police officer said that Ram Janki Temple in Tirre Manorama village had 120 bighas of land over which there was a rivalry between the former village head Amar Singh and Mahant Sitaramdas.

There was also a political rivalry between Amar Singh and the present gram pradhan, Vinay Singh, Mr Pandey said, adding that both Mahant Sitaramdas and Vinay Singh planned to get Amar Singh framed in a serious matter to serve their respective motives.

They planned to shoot the priest so that he escaped with injury and no threat to his life, he said, adding that on the day of the attack, all the accused gathered at the temple and decided that three of them would carry out the plan.

With the priest's consent, one of them fired at him while Mahant Sitaramdas pretended to be asleep in his room, the police officer said.

The home guards who rushed to the temple on hearing the gunshot saw three people escaping in the torchlight, he added.

The police said that the two people who were earlier arrested based on the case filed by Mahant Sitaramdas will be released soon.

All 10 Bodies Recovered From Tunnel Collapse Site In Jammu