UP Government Committed To Safety, Security Of All Women: Yogi Adityanath

"Those who even think of harming mothers and daughters in UP, their destruction is assured," Yogi Adityanath tweeted, amid furious criticism of his government's record on preventing crimes against women

Uttar Pradesh Chief Minister Yogi Adityanath, whose administration has been heavily criticised over the alleged gang rape and murder of a 20-year-old Dalit woman in Hathras, as well as UP Police's handling of the case, tweeted Friday to claim his government was "committed to the safety, security and development of all mothers and sisters".

"Those who even think of harming mothers and daughters in UP, their destruction is assured. They will get such punishment that will set an example for the future. The government of UP is committed to the safety and security and development of all mothers and sisters. This is our committment and promise," the Chief Minister wrote in Hindi.

On Thursday he spoke to the young woman's family via video call, promising "stringent action against the accused and all possible help (Rs 25 lakh compensation, a house and a government job for a family member)".

Yogi Adityanath's declarations come amid concerted pressure on his government over a spate of horrific crimes against women; in the days following the Hathras tragedy - which occurred September 14 - at least two other assaults and alleged rapes - one on a 11-year-old girl - were reported from the state.

Bhim Army chief Chandrashekhar Azad, who today demanded answers from Prime Minister Narendra Modi and earlier told NDTV "don't expect justice in Uttar Pradesh", has been among those most vocal of those critics. On Thursday he demanded President's Rule in the state, alleging "failure of constitutional machinery".

The family of the young woman from Hathras has alleged multiple lapses from UP Police throughout the case, including not adding a rape charge against the four accused - all from the so-called upper castes - until a formal statement was made.

The police also triggered outrage after rushing to cremate the woman's body at 2.30 am, after allegedly locking up her family in their homes and preventing them from saying a final goodbye. 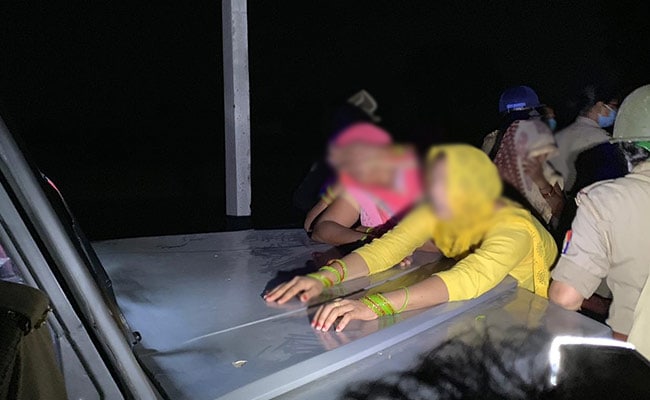 A disturbing sequence of visuals showed the family arguing with cops, female relatives throwing themselves on the hood of the ambulance carrying the body and a mother weeping helplessly as cops insisted on taking her daughter straight to cremation, without allowing her a last look.

Amid spiraling outrage, the Hathras police claimed the cremation was carried out with the family's consent and some members were present. It turned out to be one uncle - not her parents - who was called and shown the cremation.

The police have also been criticised for their manhandling of opposition leaders looking to visit Hathras and speak to the woman's family.

Apart from opposition leaders like Rahul Gandhi, who slammed the UP government for "showing Dalits their place", Priyanka Gandhi Vadra and BSP chief Mayawati, prominent personalities and celebrities have also hit out at the Yogi Adityanath government.

"Law and order in UP has deteriorated to a great extent. There is no semblance of safety for women. The criminals are committing crimes in the open," Priyanka Gandhi Vadra said on Tuesday, tweeting: "@myogiadityanath you are accountable for the safety of women in UP".

The Allahabad High Court has also taken notice of the case and has summoned top officials of the government and police to appear before it on October 12.

Amid all the outrage, Yogi Adityanath also said that a three-member panel has been set up to investigate the crime and a report is expected within a week.