UP Minister Hits Back At Akhilesh Yadav's For "Thok Do" Remark

UP Deputy Chief Minister Dinesh Sharma claimed that criminals who roamed freely in the previous Samajwadi Party regime were now in jail. 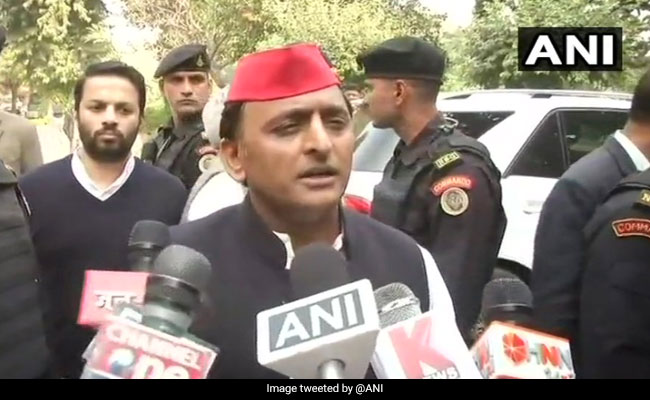 Akhilesh Yadav alleged that UP chief minister is advocating his "Thoko Neeti" everywhere.

Hitting back at Akhilesh Yadav for his recent 'Thoko Neeti' (encounter policy) remarks, UP Deputy Chief Minister Dinesh Sharma on Thursday said those "having a soft corner" for criminals are using new words to weaken the government's drive against crime and criminals.

He claimed that criminals who roamed freely in the previous Samajwadi Party regime were now in jail.

”He (Akhilesh) does not have any answer. In the previous SP government, criminals roamed freely on the streets, operated as party workers inside a police station. Now those criminals are in the jail.

"Those having soft corner for criminals are using new words only to weaken the government's drive against crime and criminals. The more vigorous attack is done on the criminals, the more pain is felt by those having sympathy towards them," Mr Sharma said.

His remarks came days after Akhilesh Yadav alleged that the police officers in Uttar Pradesh are following the 'Thoko Neeti' (encounter policy) of Chief Minister Yogi Adityanath to avoid getting transferred.

"The UP chief minister is advocating his Thoko Neeti (encounter policy) everywhere. Due to this, there is a trend among the police officials that they undertake encounters when they anticipate that they can be transferred. Their acts are emulated by their subordinates," Mr Yadav had said.

Seeking support from all sections of the society for the success of anti-crime measures taken by the BJP government, Mr Sharma said that the UP chief minister has made it amply clear to policemen that there should be "zero tolerance" towards crime.