UP cop who insulted rape survivor transferred to Kanpur 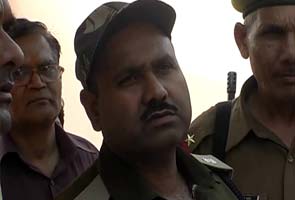 Deoria, Uttar Pradesh: A senior Uttar Pradesh police officer has been transferred from Deoria to Kanpur after he made derogatory comments about a woman who has alleged rape and wanted to file a police complaint.

"Her oldest child is 14. Why would anyone rape such an elderly woman?" the officer, identified as Assistant Superintendent of Police KC Goswami, told the woman in front of a crowd yesterday. The remark was filmed by local media in Deoria in eastern Uttar Pradesh.

Mr Goswami has also been asked to explain his comments within two days. Earlier today, Uttar Pradesh Inspector General of Police (Law And Order) Rajkumar Vishwakarma apologised for the insulting remark and said action will be taken against the officer.

"He has to give an explanation within two days. He will be investigated. A case has been filed based on the woman's complaint. We will ensure that such statements that can hurt sentiments are not made by our officers in the future," Mr Vishwakarma had said.

The woman, who is 35, had been chasing the police for two days to register her case. Her husband said a villager she recognises had raped her on Wednesday night. "She was dragged to the farms and raped. The police said that rape cannot happen to a 35-year-old," he said.

Promoted
Listen to the latest songs, only on JioSaavn.com
Since a medical student was fatally gang-raped on a Delhi bus in December, activists and others have been highlighting the need for police officers to be trained in how to handle women who make complaints of sexual violence.

"It's disgraceful that a senior a police officer makes such an irresponsible and insensitive comment. He should be immediately suspended," said Ranjana Kumari, a women's rights activist.