"UP Victory Will Open Doors To 2024": Amit Shah In Varanasi 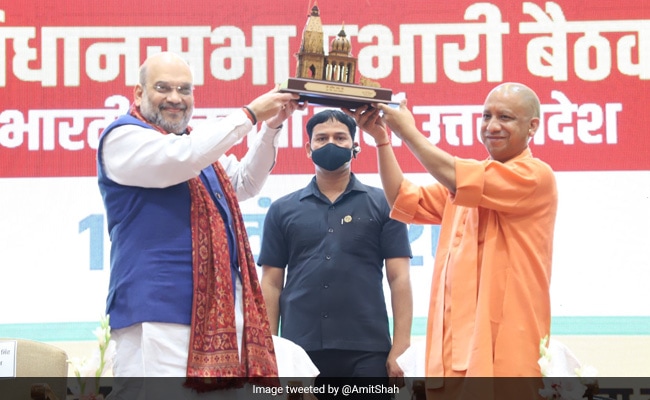 Every single BJP worker should try to get votes from at least three families each, Home Minister Amit Shah said today in Varanasi, where he checked the groundwork for the assembly election in Uttar Pradesh early next year. He said a win in Uttar Pradesh "will open the doors to 2024", referring to the next general election.

Mr Shah, who was BJP national chief before he was made Home Minister, shared the stage with Chief Minister Yogi Adityanath before they interacted with party workers and leaders in Varanasi, which is also the Lok Sabha constituency of Prime Minister Narendra Modi.

In his addressed that lasted well over an hour, Mr Shah asked party workers to ensure booth-level campaigns are strengthened, for which "booth committees" have to be set up.

"We need every person to influence 60 people each to vote for BJP, and to aim for at least 20 votes from that circle. Simultaneously, one party worker should get votes from three families each," Mr Shah said.

"This is not an ordinary election. This is an election to take the country ahead and to uphold the dignity of the nation," the Home Minister said, adding the party should upfront the central government's schemes such as free gas cylinders and PM's programmes for farmers. However, Mr Shah did not touch upon the current protests by farmers, especially from Punjab and Haryana, against the three controversial farm laws.

"Congress workers have for so many years only indulged in corruption and things that cause chaos and divisive politics. If the BJP gets as many years in power as the Congress, then India will turn into an economic powerhouse," Mr Shah said. "Mafia and gunda raj have been controlled under Yogi Adityanath's government. We have to create a better Uttar Pradesh in the next five years. The UP victory will open the doors to 2024," Mr Shah said.

Mr Shah is scheduled to visit Akhilesh Yadav's Lok Sabha constituency Azamgarh tomorrow, while the Samajwadi Party chief will be in Gorakhpur, the bastion of the UP Chief Minister.