Punjab is expecting arrival of 180 lakh tonnes wheat in the market this season. Of this, the government agencies are likely to procure 130 lakh tonnes. 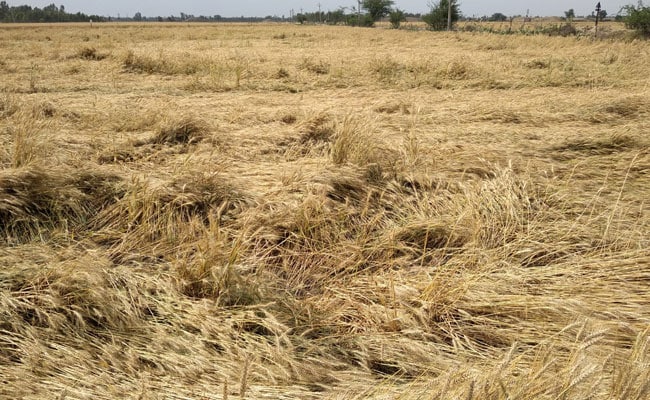 In 500 villages of Ropar district, ready wheat crop in over 2,000 acres has been damaged by rain

Standing wheat crop was damaged after rain, dust-storm and strong winds lashed Punjab and Haryana on Tuesday and Wednesday. Wheat crop is being harvested in most part of the two states for the past 10 days.

"The strong winds and rain have damaged our wheat crop. The government should immediately order girdawri (harvest inspection) and offer compensation to farmers," said Harnek Singh, a farmer in the Ropar district.

Punjab is expecting arrival of 180 lakh tonnes wheat in the market this season. Of this, the government agencies are likely to procure 130 lakh tonnes.

Following the ordeal caused by the unseasonal rains, Punjab chief minister Captain Amarinder Singh has ordered the revenue department to conduct special assessment of the damage.

"In his directive to the departments and officials concerned, the Chief Minister asked them to start without delay, the special girdawari for damage assessment due to the weather disruptions," a state government spokesperson said, adding the assessment should be completed on priority.

The order came after the Opposition Aam Aadmi Party (AAP) and the Shiromani Akali Dal (SAD) expressed concern over the losses.

In a statement in Chandigarh, Mr Badal said that the farmers were already reeling under fiscal stress because of Amarinder Singh's betrayal of them on complete waiver of all kinds of debt for every farmer in the state.

"Farmers trusted him as he took an oath in the name of Sri Guru Gobind Singh ji's sacred 'charan'. Their trust has been cruelly betrayed and they are completely heart-broken and under severe financial stress," he said.

Demanding immediate interim relief and compensation for the farmers, the Akali Dal leader said that under changed circumstances, every farmer must be paid a minimum of Rs 15000 as compensation per acre.

AAP legislator and opposition leader Harpal Singh Cheema said the untimely rain have proved double whammy for the farmers as they are already grappling with farm issues and concerns.

"In many areas, crops have been totally destroyed resulting in losses of lakhs. In 500 villages of the Ropar district, ready wheat crop in over 2,000 acres was damaged by the rain. A large number of distressed farmers from these villages held a dharna to press the government for release of compensation," Mr Cheema said.

Mr Cheema also urged the government to conduct inspection on priority and release 100 per cent compensation to the affected farmers within a stipulated time frame.

The maximum temperatures in Punjab and Haryana remained between 30 degree Celsius and 32 degree Celsius, three-seven degree below normal.

Met Department officials said the weather was likely to clear up by Thursday morning.