"United": Kamala Harris's Message On Eve Of Swearing In As US Vice-President

Americans are "united in spirit" despite physical separation, the US Vice-President-elect has said. 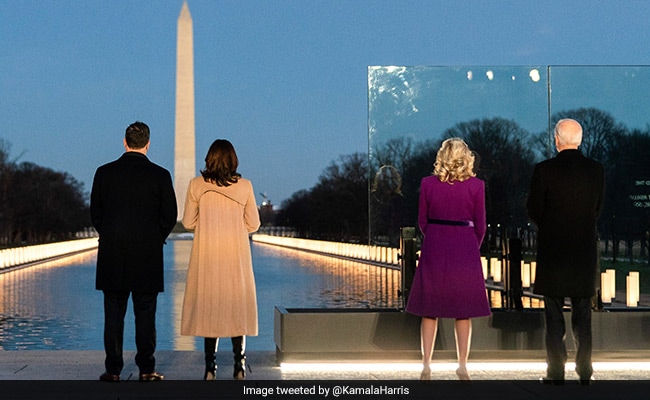 Kamala Harris's message comes at a time of unprecedented turmoil in the US.

A day before she was to take charge as the 49th Vice-President of the United States of America, Kamala Harris sent out a message of "unity" and "togetherness" to a country still reeling under the twin blows of the Covid-19 pandemic and unprecedented political turmoil.

Posting a photo of herself with husband Doug Emhoff, US President-elect Joe Biden, and his wife Jill Biden - all in the backdrop of the Washington Monument in the US capital at twilight yesterday - Ms Harris tweeted that Americans were "united in spirit" despite physical separation.

Though we may be physically separated, we, the American people are united in spirit. pic.twitter.com/s5v4KIjbSX

This keeps with her earlier tweets in the same spirit where she had said, "We gather together to pay tribute to the lives lost from COVID-19. A grandmother or grandfather who was our whole world. A parent, partner, sibling, or friend who we still cannot accept is no longer here. Tonight, we grieve and begin healing - together."

On Wednesday (January 20), she will be sworn in as the US's first female, first African-American, and first Asian-American Vice-President. She would also then become the highest-ranking female elected official in US history.

In another tweet posted yesterday evening, she said, "Starting tomorrow, @JoeBiden and I will work to unify our country, tackle the challenges facing our nation, and renew the promise of America."

The Vice-President-elect's message of unity comes at a time of transition in political leadership following months of acrimony culminating in the ransacking of the US Capitol on January 6 - something never heard of in US history. It also comes as a healing touch to millions of Americans, either mourning their dear ones lost to the pandemic or suffering themselves. The US has lost over 4 lakh lives to the virus, with more than 24 million positive case recorded, till now.