The commissioning of "Varad" would enhance the Coast Guard's capability besides strengthening the country's security, Union Shipping Minister said. 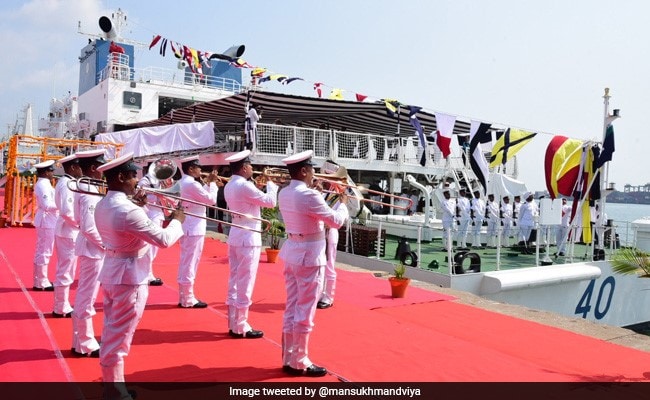 The 98-metre long craft, that can travel upto 10,000 kms non-stop, is the fifth in the series of seven indigenously designed patrol vessels being built by the Larsen and Toubro Shipyard as part of the Centre's Make in India programme.

It was commissioned by Mr Mandaviya in the presence of Coast Guard Director General K Natarajan, Chennai Port Trust Chairman P Raveendran and senior government officials at the Chennai Port.

The minister unveiled a plaque marking the commissioning of the ship, which underwent extensive trials since August last year when it was launched.

Speaking on the occasion, he said Coast Guard effectively establishes its presence for country's safety and that of the fishermen if there was any disaster in the sea like oil spill.

"Every year one lakh vessels pass through Indian seas. East or West on the shipping route, Coast Guard's role is to guide vessels, assist (them) during disaster," he said.

The commissioning of "Varad" would enhance the Coast Guard's capability besides strengthening the country's security, he said.

Earlier, the Minister, on a two-day visit to Chennai and Puducherry, was accorded a warm welcome by Coast Guard personnel on his arrival at the Chennai Port.

Coast Guard Director General Natarajan, in his address, said the vessel succeeds the previous generation of ICGS "Varad" which was in service for 28 years.

He said 90 per cent of the funding allotted to Coast Guard had been spent on indigenisation of vessels.

"On March 15, the first twin engine helicopter is going to be handed over (to Coast Guard by HAL). Even that can land on this ship. That is the kind of power," the Coast Guard official said.

He said there were 61 Coast Guard ships under various levels of construction at public and private shipyards.

"The stronger the Coast Guard, the borders are protected and economy of the country will develop significantly," he said.

The ship propelled by twin engines is capable of achieving maximum speed of 26 knots and endurance of 5,000 nautical miles.

The vessel, led by Commandant Pintu Bag and manned by 11 officers and 91 men, is currently based at Paradip in Odisha under the Commander Coast Guard Region (North East).