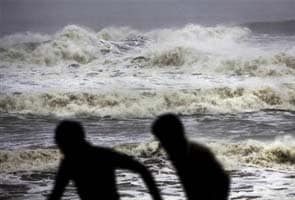 Bhubaneswar: Union Home Secretary Anil Goswami arrived in Odisha on Sunday on a one-day visit to make on-the-spot assessment of the damage caused by cyclone Phailin and subsequent floods.

Mr Goswami proceeded to the worst hit Ganjam district along with senior state officials after arriving at the Biju Patnaik airport in Bhubaneswar.

He will visit the worst flood-hit district of Balasore, a senior official of the state revenue department told IANS.

Mr Goswami will review the ongoing relief and restoration works in the cyclone and flood-hit districts before returning back to Delhi in the evening, the official added.

The severe tropical cyclone in the Bay of Bengal, which made landfall Oct 12 night near Gopalpur in Odisha's Ganjam district, has left behind a trail of destruction in several coastal districts of Odisha.

Although damage to properties was estimated at several crore rupees, the loss of lives was minimal compared to the 1999 super cyclone that left over 10,000 dead.

The toll from the latest cyclone and flooding rose to 44 as the government on Wednesday confirmed eight more deaths due to floods.

The low casualty figures were due to large-scale evacuation before the cyclone struck the land.

Promoted
Listen to the latest songs, only on JioSaavn.com
About 1.2 crore people in 17 districts of the state have been affected by the cyclone and subsequent floods, according to government data.