Union Home Minister Amit Shah said that the efforts were made to create a lot of controversies around the Hindi language but that time is over now. 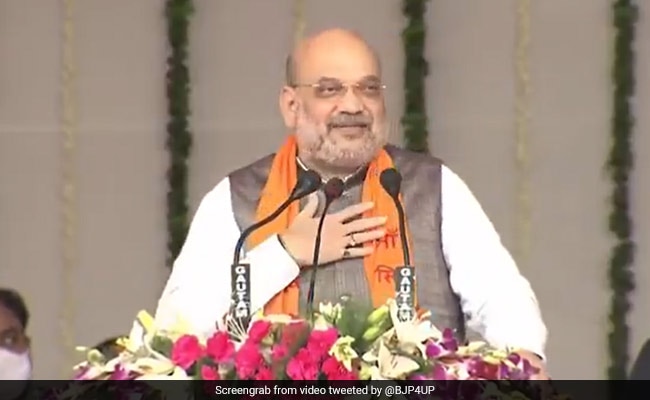 Union Home Minister Amit Shah on Saturday said that Hindi is the friend of all indigenous languages and added that India's prosperity lies in the prosperity of our Indian languages.

Addressing the Akhil Bharatiya Rajbhasha Sammelan in Varanasi on the second day of his visit to the city, Mr Shah said, "Hindi is the friend of all indigenous languages. India's prosperity lies in the prosperity of our Indian languages. I have seen that a sense of inferiority complex was instilled in the minds of the children who couldn't speak English. It is my firm belief that the time is not far when those who can't speak their mother tongue will feel inferiority complex."

"A country that cannot preserve its languages, cannot also preserve its culture and organic thought process. Such a country to the development of the world. Thus, it is very important for us to preserve and prosper our languages," he said.

The Union Home Minister said, "Once the people of our country decide and our languages become the language of governance, we will automatically get back the knowledge trove of Maharishi Patanjali and Panini. We need to shun out the inferiority complex from the minds of the youth that was instilled during British rule. We need to create an environment wherein people take pride in speaking their mother tongue."

The Home Minister further said that the efforts were made to create a lot of controversies around the Hindi language but that time is over now. "The conversation and development of Indian languages is a central pillar of the National Educational Policy. Syllabus of engineering and medical courses have been translated into 8 Indian languages so far," he said.

Mentioning about the working of the Home Ministry, Mr Shah said, "Today I feel very proud to say that, not even a single file is written in English in the Union Home Ministry. We have completely adopted the Rajbhasha."

Mr Shah, prior to his address, released a Hindi magazine at first Akhil Bhartiya Rajbhasha Sammelan at Deendayal hastkala sankul in Varanasi.

Ahead of the upcoming assembly polls in Uttar Pradesh, the Union Home Minister also held a review meeting with Vidhan Sabha in charge of the Bharatiya Janata Party (BJP) in Varanasi on Friday.

Mr Shah's visit is significant in view of the upcoming high-stake Assembly elections in Uttar Pradesh and urged people to converse in their mother tongue and take pride in speaking their native language. The next elections are scheduled to be held early next year to elect 403 members of the Uttar Pradesh Legislative Assembly.