"Under Pressure", 3 Women Call Off 6-Day Hunger Strike In Maharashtra

The girls briefly discussed among themselves and reluctantly agreed to call off their agitation, but said nothing about ending the hunger strike. 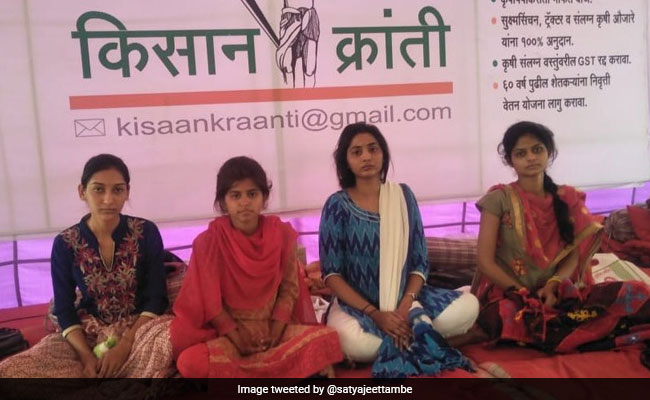 The three were forcibly admitted to the hospital by police: Police (File)

Hours after they were forcibly admitted to hospital, three Maharashtra farmers' daughters on Saturday afternoon called off their agitation, but claimed it was done "under pressure" from the government.

The trio of collegians - Nikita Jadhav, 20, Shubhangi Jadhav and Poonam Jadhav, 19 each - were offered a glass of water and fruit juice by Minister of State for Health Arjun Khopkar who arrived in Ahmednagar to meet them.

Calling on them at the Ahmednagar civil hospital where they were forcibly admitted by the police, the minister requested and cajoled them to end the hunger strike in view of their deteriorating physical condition.

Arjun Khopkar also assured that he would discuss all their demands with the government and even promised to arrange their meeting with Chief Minister Devendra Fadnavis and Shiv Sena President Uddhav Thackeray within a couple of days.

The girls briefly discussed among themselves and reluctantly agreed to call off their agitation, but said nothing about ending the hunger strike.

Later, speaking to mediapersons, the Jadhav girls - who are friends - claimed that they were under severe pressures since the past 24 hours to call off their agitation but finally agreed to do so after the minister's assurances this afternoon.

"However, if our demands are not accepted fully we shall launch another agitation," warned Nikita Jadhav, with Shubhangi and Poonam in tow, as they prepared to return to Puntamba by this evening.

Apprehensive over its political ramifications, the Maharashtra Police and local government officials forcibly broke their six-day long hunger strike in a pre-dawn swoop.

Around 2 a.m., a police team suddenly raided the marquee where the girls, their relatives and supporters were resting, bundled them in waiting vans and whisked them off to Ahmednagar Civil Hospital, around 85 km away.

The police teams also uprooted the marquee, banners, posters and other stuff, after local officials claimed it was "illegally erected", detained protesting relatives and supporters of the girls and chased away onlookers.

Angered by the action, Puntamba village woke up and observed a spontaneous shutdown - the second in three days - demanding that the girls be immediately set free.

Nikita, Shubhangi and Poonam launched the indefinite hunger from February 4 after a day's token strike on February 3, for various farmers' demands.

These include full waiver of all farm loans, minimum support price for farm produce, pension for all farmers above 60 years age, free power for agriculture purposes, Goods and Services (GST) waiver on all farm equipment and machinery, raising procurement prices of milk which are now lower than soft drinks available in the market.

The girls' fast grabbed attention from all over, Puntamba observed a "bandh" on February 6, schoolgirls and villagers staged a black flag procession and delegations from neighbouring villages came visiting to express their support.