Cyclone Yaas is the second cyclonic storm to hit India within a week after Tauktae tore into its western coast, causing death and destruction. 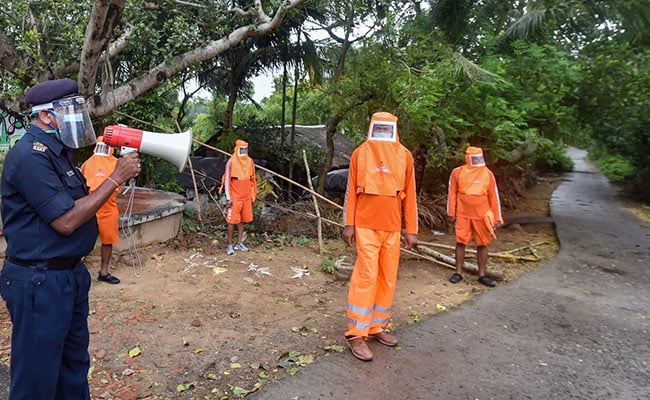 Cyclone Yaas: More than 21 lakh people were evacuated to safe shelters in Bengal, Odisha and Jharkhand.

As Tropical Cyclone Yaas ravaged parts of India's eastern coast, a spokesperson for UN Secretary General Antonio Guterres has said the world body and its agencies stand ready to support the response efforts if state authorities request it, while expressing concern that lack of social distancing in emergency shelters and temporary suspension of vaccination campaigns amid the COVID-19 pandemic could further complicate the health crisis.

"From South Asia, which is being impacted currently by Tropical Cyclone Yaas, our humanitarian colleagues tell us that we have activated cyclone preparedness measures and prepositioned stocks of food and other items," Stephane Dujarric, Spokesman for the Secretary-General, said at the daily press briefing on Wednesday.

"The cyclone reached the Indian state of Odisha yesterday, with millions of people being evacuated by the Government ahead of the storm. UN agencies and our partners in India stand ready to support the response efforts if State authorities request it," he said.

UN humanitarian colleagues in Nepal say the country could also experience heavy rainfall with floods and landslides over the coming hours, Dujarric said, adding that in Bangladesh, "our colleagues say the cyclone has not impacted Cox's Bazar, but they are closely monitoring the situation due to the possibility of storm surges and embankment collapse in border areas." Cox's Bazar is home to the world's largest refugee camp, with nearly a million Rohingya migrants residing at the enclosures in Ukhiya and Teknaf Upazilas.

"As you know, India, Bangladesh and Nepal are all grappling with the COVID-19 pandemic. We are concerned that the lack of social distancing in emergency shelters and the temporary suspension of vaccination campaigns could complicate already complicated efforts," he said.

Cyclone Yaas, packing winds gusting to 145 kmph whiplashed parts of India's eastern coast on Wednesday, killing at least four people and leaving behind a trail of damaged homes and flooded farmland, forcing more than 21 lakh people to be evacuated to safe shelters in the states of West Bengal, Odisha and Jharkhand.

The cyclone, which made landfall around 9 am near Dhamra port in Odisha, is the second cyclonic storm to hit India within a week after Tauktae tore into its western coast, causing death and destruction.

Odisha shifted 6.5 lakh people to safer places, and West Bengal 15 lakh people, ahead of the cyclone, amid concerns over spread of COVID-19 infection at the temporary shelters, given the fact that the country is battling the raging second wave of the pandemic.

Odisha Chief Minister Naveen Patnaik ordered health screening of all the 6.5 lakh people taken to the cyclone shelters, including COVID-19 tests if required.