Mr Gandhi's "jealousy" of young leaders like Jyotiraditya Scindia and Sachin Pilot was the reason that states like Madhya Pradesh and Rajasthan are slipping out of the Congress's grasp, Uma Bharti said. 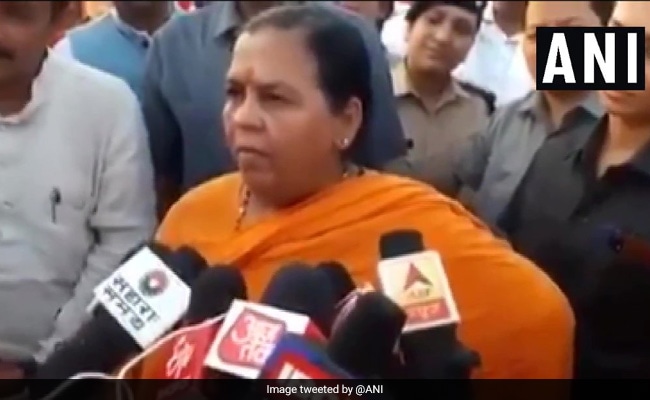 Uma Bharti said, "Both Sachin Pilot and Jyotiraditya Scindia are worthy. Both are like my nephews".

Senior BJP leader Uma Bharti has blamed the Congress's current crisis in Rajasthan and the one in Madhya Pradesh on Rahul Gandhi. It is Rahul Gandhi's "jealousy" of young leaders like Jyotiraditya Scindia and Sachin Pilot which has brought about the "destruction of the Congress", she said today. The Union minister also became the first BJP leader to extend an open invitation to Mr Pilot to join the party.

"Both Sachin and Jyotiraditya Scindia are worthy. Both are like my nephews. If Sachin comes here (in the BJP) we will be very happy," said the 61-year-old saffron-robed leader, who shared close links with Mr Scindia's family, the erstwhile royals of Gwalior.

Mr Gandhi's "jealousy" of young leaders like Jyotiraditya Scindia and Sachin Pilot was the reason that states like Madhya Pradesh and Rajasthan are slipping out of the Congress's grasp, she said.

"Rahul Gandhi feels that if leaders like Sachin ae given a chance of advancement, no one will care about him," Ms Bharti said. "Both of them (Mr Scindia and Mr Pilot) will become leaders of the younger generation of the Congress," she added.

The Congress, which lost Madhya Pradesh to the BJP three months ago, is firefighting in Rajasthan following an open revolt by Mr Pilot. The 42 year-old, who camped out in Delhi for more than two days over the weekend, was not granted a meeting with Rahul Gandhi or his mother and party chief Sonia Gandhi. Today, the Congress said the top leadership has been in touch with him.

In Madhya Pradesh, the Congress government led by Kamal Nath collapsed in March after Jyoriraditya Scindia, once the closest aide of Rahul Gandhi, quit the party with 22 loyalists, alleging that he was being not given enough space. He also alleged that he was not allowed to meet Rahul Gandhi before taking the ultimate step of quitting the party of 19 years. Mr Gandhi had rubbished the allegation, saying Mr
Scindia was the only leader who could walk into his house any time.

Both Mr Pilot and Mr Scindia -- leaders with mass following -- had to settle for less than what they expected after Congress won the assembly election in Rajasthan and Madhya Pradesh in 2018.  Despite making their ambition for the top job clear, they climbed down following personal intervention by Rahul Gandhi.

In both states, the top post went to the old guard -- 71-year-old Kamal Nath and 67-year-old Ashok Gehlot. Mr Scindia was made the in-charge western Uttar Pradesh ahead of the Lok Sabha elections.

Mr Pilot, seen as responsible for the rejuvenation of the party after its decimation by the BJP in 2013 -- was made the Deputy Chief Minister and allowed to retain the post of the state party chief.