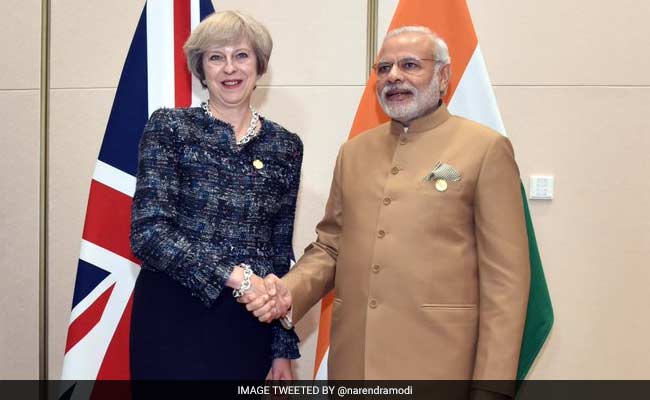 Hangzhou: Britain's new visa policy could have a "negative impact" on Indian working professionals' short term business visits to the UK, Prime Minister Narendra Modi today told his British counterpart Theresa May during their first meeting after she became Premier.

The Prime Minister invited British firms to 'Make in India' as both leaders also looked forward to an early visit by Defence Minister Manohar Parrikar to the UK, he said.

During the meeting, PM Modi also spoke about challenges of terrorism, which he said is the "biggest threat to the world and knows no boundaries".

He alluded to Theresa May's previous stint as Home Secretary and said she was well aware of the dangers of terrorism, Mr Swarup said. In this context, the two leaders discussed counter terrorism cooperation.

PM Modi said that the recent meeting of the India-UK joint group on counter terrorism was very useful and called for greater collaboration in cyber security and intelligence sharing besides information gathering.

Theresa May said she was very keen to support PM Modi's vision for India and the broader strategic partnership including the decisions taken during his successful visit to Britain last November.

She also underlined the importance Britain attaches to the Indian diaspora.

This was their first face-to-face meeting between the two leaders after Theresa May took over as the Prime Minister following the resignation of David Cameron after Britain's exit from the European Union.

The fact that she had deputed three Ministers to India - Preeti Patel, Alok Sharma, and Greg Clarke showed the priority she attached to India, Mr Swarup said.

"The Prime Minister underlined that even after the Brexit, the UK remained as important to India as before," he said.

In this context, he referred to the recent launch of the HSBC Corporate Rupee bond on the London Stock Exchange which has been very successful. India, PM Modi said, also needed more UK participation in 'Make in India'.

The Prime Minister also referred to passage of GST bill, which he said would further boost trade and investment ties with UK, Mr Swarup said.

Promoted
Listen to the latest songs, only on JioSaavn.com
PM Modi also invited Theresa May to visit India in her new capacity.

Theresa May accepted the invitation and said she would like to make as early a visit to India as possible.