As the two leaders met at the Chief Minister's Mumbai home Matoshree, speculation intensified on a strain in their ties over Sharad Pawar's suggestion that Maharashtra should reopen gradually and emerge from the indefinite shutdown to revive economic activities.

Two meetings in Maharashtra involving NCP veteran Sharad Pawar have generated speculation of trouble within the state's ruling Shiv Sena-led coalition, of which his party is a key constituent.

Sharad Pawar, 79, met with Maharashtra Chief Minister Uddhav Thackeray at his Mumbai home "Matoshree" last evening as reports circulated of a rift over the coronavirus crisis and a lockdown exit strategy for the state worst hit by the pandemic in India.

Mr Pawar, reports suggest, has been unhappy at Mr Thackeray's reluctance to end the lockdown and actively explore his suggestions to reopen Maharashtra gradually and wind down its indefinite shutdown to restart economic activities.

"There is no threat to the Maharashtra government. All MLAs are with us," Sharad Pawar told NDTV.

"Devendra Fadnavis is getting impatient," he remarked, referring to the former Chief Minister and BJP leader who made a short-lived attempt to return to power last year.

The Shiv Sena also rubbished the reports and accused the BJP of starting the rumours in its desperation for power.

"The two leaders had a discussion for an hour and a half. If anyone is spreading news about the stability of the government, it is their stomach ache. The government is strong. No worries. Jai Maharashtra!!" - this tweet by Shiv Sena MP Sanjay Raut, one of party's most prominent leaders, was aimed at putting a lid on talk of a feud.

What powered the rumours was Mr Pawar's meeting with Governor Bhagat Singh Koshyari hours before he went to Mr Thackeray's home.

NCP leader Praful Patel, who accompanied Mr Pawar to that meeting, downplayed its role in the sequence of events. "It was only a courtesy meeting between Pawar Saheb and the honourable Governor, we went there just to have a cup of tea. Governor Saheb had invited Pawar Saheb for a tea. We were there just for courtesy there was no politics involved in this meet," said Mr Patel, a former union minister. 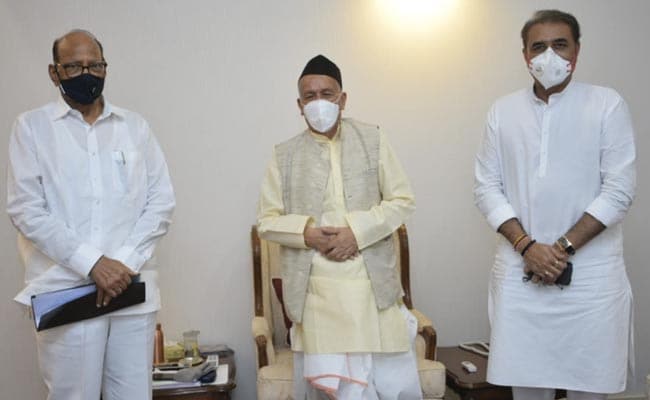 But it was his other comment that registered more sharply. Mr Patel told reporters that Railways Minister Piyush Goyal was doing a good job, that too on a day Mr Goyal had relentlessly attacked Uddhav Thackeray and the Sena over migrant trains for Maharashtra.

Significantly, the NCP had been silent when Mr Thackeray and the Sena alleged that the Railways Ministry had not sent enough trains to Maharashtra to take migrant workers from the state.

The NCP chief's first meeting with the Governor since the coalition came to power also drew interest because Mr Pawar has been openly critical of Mr Koshyari's "intervention" in the functioning of the state administration, for example, when the governor recently objected to state Minister Uday Samant's letter to the University Grants Commission recommending the scrapping of university exams.

In the middle of the perceived turbulence in the ruling Maha Vikas Aghadi, BJP leader Narayan Rane also met with the Governor and demanded President's Rule in the state, alleging that the Shiv Sena-led coalition government had failed to tackle the COVID-19 crisis.

Last week, the BJP had held protests attacking the Uddhav Thackeray government over its handling of the pandemic.