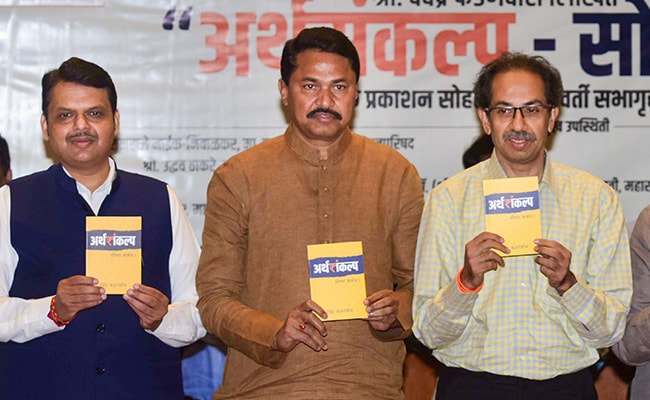 In a swipe at the BJP at the centre, Maharashtra Chief Minister Uddhav Thackeray on Wednesday wondered if demonetisation, which had an impact on the economy, shouldn't have found a mention in subsequent national budgets.

He was speaking at the launch of a book written by his predecessor, Devendra Fadnavis, titled "Arthsankalp: Sopya Bhashet" (Budget Simplified).

During his speech which was peppered with wit, Mr Thackeray said he hoped that Mr Fadnavis keeps writing books on the budgets presented by the Shiv Sena-led Maha Vikas Aghadi government for a long time.

"You have written a book on budget before we present our first budget. You should keep writing such books on our budgets for the next five-ten years. So we will come to know the deficiencies on our part (in budgets)," Mr Thackeray said.

In a barely-veiled swipe at the BJP-led Union government, he further said, "I always wonder, shouldn't notes-ban have found mention in the (subsequent) budgets when when we mention even smaller things in the budget? I am not saying if (the decision of demonetisation) was good or bad.

"But I don't know whether the ban on currency, on which the economy is dependent, shouldn't have had figured in the budget," Mr Thackeray added.

Several economists as well as opposition parties had criticised Prime Minister Narendra Modi's decision to scrap Rs 500 and Rs 1,000 currency notes in 2016, blaming it for causing a huge disruption in the economy.

Mr Thackeray, however, had words of praise for Devendra Fadnavis, who is now Leader of Opposition in the assembly.

Mr Fadnavis has simplified the subject in his book for the benefit lay persons, he said.

Ajit Pawar, who holds the finance portfolio, said that opposition leaders often create chaos when budgets are presented, and praised Mr Fadnavis for being a patient listener instead.

Mr Fadnavis is also a "good litterateur" who should take up this role full-time, giving up politics, he said. "It will bring `good days'' for us," Pawar quipped. Mr Fadnavis said even MLAs sometimes find budgets
complicated.

"This book is written for commoners," he said, adding he intends to bring out its English edition too.