"I was confident of cracking the examination but didn't expect a perfect score. Similarly, making it to the Limca Book of Records was not something I ever dreamt of," Veerwal told PTI. 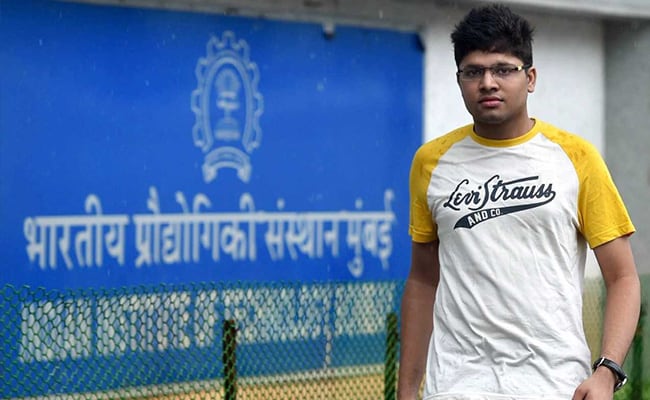 After Kalipit Veerwal scored 100 per cent in JEE, he got 109th rank in JEE-Advanced. (PTI)

New Delhi: The first-ever student to have scored 100 per cent in the prestigious Joint Entrance Examination- Mains, Udaipur boy Kalpit Veerwal has made it to the Limca Book of Records for his feat. Veerwal scored 360 out of 360 in the JEE-Mains this year and is now studying Computer Science at Indian Institute of Technology, Bombay. His record of the perfect score will feature under the "Education Achievements" category of the 2018 edition, an official from the Limca Book of Records said.

"I was confident of cracking the examination but didn't expect a perfect score. Similarly, making it to the Limca Book of Records was not something I ever dreamt of," Veerwal told PTI over phone from Mumbai.

Veerwal's home city of Udaipur is not more than 300 km from Kota, which is referred to as country's "coaching hub" because of large number of medical and engineering aspirants who go there for their preparations.

"I did not study for 15 hours a day, I did not go down the usual 'Kota route' for IIT preparations but consistent studies helped me a lot," he said.

Veerwal's father Pushpendra Veerwal is a nurse at the Maharana Bhupal Government Hospital in Rajasthan's Udaipur while his mother Pushpa is a government school teacher. His elder brother is pursuing MBBS from AIIMS, Jodhpur.

"All we want for our children was to study at good colleges and land up jobs that could help them in easy survival. We never pressured them to come first in class, score 90 per cent, get the top rank or bag a job that would make them millionaires.

"Everybody suggested that we should send him to Kota or Hyderabad for coaching but we decided not to put him under any extra pressure and enrol him in an institute here. But him making a record is not something we ever expected," his father told PTI.

Veerwal scored 109th rank in the JEE-Advanced. Out of the over 11.8 lakh students, who appeared for the examination for admission to various IITs and engineering colleges, around 2.2 lakh have qualified for the second and final round -- the JEE (Advanced).

Veerwal had also topped the Indian Junior Science Olympiad in class 9 and bagged the top spot in the National Talent Search Examination in Class 10.

A student of MDS Senior Secondary School in Udaipur, Veerwal took coaching from Resonance institute there.

(This story has not been edited by NDTV staff and is auto-generated from a syndicated feed.)
Comments
Kalpit Veerwaliit jee 2017Limca Book of Records