The man was arrested - along with his brother - earlier this month after he tried to get his marriage registered with a 22-year-old Hindu woman in Moradabad.

A Muslim Man and his brother, arrested in Love Jihad case, walked out of jail after two weeks.

A Muslim man and his brother, arrested and jailed under Uttar Pradesh's new law against "unlawful" conversion, were freed this morning after spending nearly two weeks in prison in Moradabad district. The UP Police was unable to find any evidence of forced conversion against them, said sources.

The man was arrested - along with his brother - earlier this month after he tried to get his marriage registered with a 22-year-old Hindu woman in Moradabad's Kanth area, about 350 km from state capital Lucknow. The couple was heckled by a right-wing group, the Bajrang Dal, and the pregnant woman was taken to a shelter after the men were arrested; the government had denied her claims that she was given an injection "to induce miscarriage".

The men were freed after a court ordered their release, news agency PTI reported, amid heightened sensitivity about "Love Jihad", the right-wing conspiracy theory that Muslim men try to seduce Hindu women to have them convert their religion.

"What can I say. We married with consent. I spent 15 days in jail. I am very happy today," the man said after stepping out of the prison. When asked if he felt the police had misused the new law, he refused to comment. A video showed him meeting his family as he received a tearful welcome. 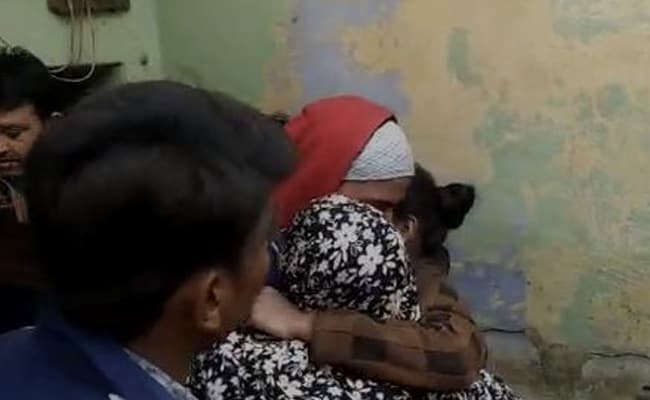 The man received a tearful welcome at home.

The men were handed over to the police after a group of people from a right-wing group, the Bajrang Dal, accosted them and the 22-year-old woman at the marriage registration office and stopped them from going ahead with the registration formalities.

In a nearly one minute long video, widely shared on social media, the men from Bajrang Dal can be seen surrounding the woman at the police station. "Show us the permission you have from the DM (District Magistrate) to convert your religion," a man is heard telling her, as at least two policemen, one of them with a baton, looks on.

"Have you read the new law or not?" another man says, adding: "Ye tum jaise logon ke liye banana pada hai (the law had to be made for people like you)".

The couple got married in July, four months before the law came into force, the woman had told reporters. "I am an adult, I am 22 years old. I got married of my own free will on the 24th of July. This is the fifth month that we have been married," she said.

The pregnant woman was first kept at a shelter by the Moradabad Police but later released by the magistrate. She later alleged that a government doctor gave her an injection "to induce a miscarriage". However, government doctors and police denied it. She was hospitalized twice in three days over complaints of stomachache, bleeding and spotting.

On Friday, four former judges criticised the new anti-conversion legislation, aimed at curbing cases of so-called "love jihad", calling it unconstitutional, and against fundamental rights. It's one of the strangest laws, they added, and even termed "love jihad" a "creation of religious extremists for the purpose of dividing people."

The Yogi Adityananth government had last month cleared an ordinance - Uttar Pradesh Prohibition of Unlawful Conversion of Religion Ordinance, 2020 - which requires any proposal to convert permission from the District Magistrate, two months in advance.

It prohibits any conversion by "misrepresentation, force, undue influence, coercion, allurement, or by any fraudulent means or by marriage." The law significantly also says that marriages that are done "for the sole purpose of unlawful conversion or vice versa" would not be allowed.