The blue tick was restored within a few hours, reportedly when objections were raised by the Vice President's office.

Twitter briefly removed the blue tick or "verified" badge from the personal handle of Vice President M. Venkaiah Naidu on Saturday in new provocation for the government in an ongoing standoff.

The blue tick was restored within a few hours, reportedly when objections were raised by the Vice President's office. The Ministry of Electronics and IT is likely to issue notice to Twitter asking why this was done without "prior intimation". "This is contempt of a constitutional post. Twitter wants to test India's patience," said sources. 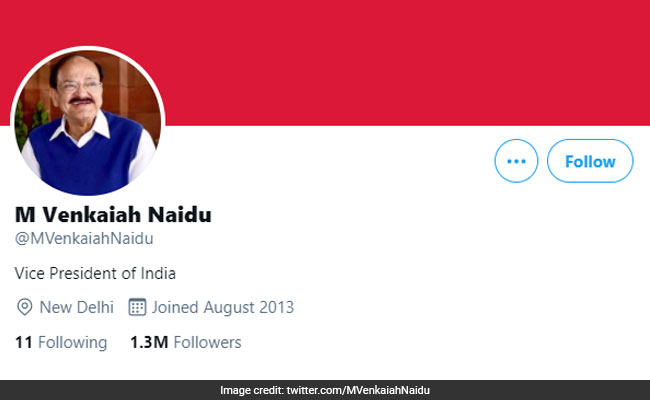 Government sources, however, called it an outrageous act against the "Number 2" constitutional head of the country. They pointed out that the accounts of former Union Ministers Arun Jaitley and Sushma Swaraj had stayed verified long after their death in 2019.

Twitter's act of "unverifying" the account of Mr Naidu, a former BJP president who has been Vice President of India since 2017, is controversial in the middle of its confrontation with the government over a range of issues including its stand on new digital rules for social media sites.

After flagging "freedom of expression" concerns over the new rules, Twitter appointed an Indian interim grievance redressal officer, but has yet to name a compliance officer and a nodal officer mandated by the Centre's rules. Shortly after the flap over Mr Naidu's account, the IT ministry sent notice to the social media giant giving "one last chance" to comply or face consequences.

Last month, Twitter's move to mark as "manipulated media" the posts of BJP leaders on an alleged Congress toolkit drew a sharp response from the government, which sternly asked the site to undo the label, calling it "an overreach and prejudicial".

The accounts of some prominent RSS leaders have also lost their "verified" status because of inactivity. The RSS or Rashtriya Swayamsevak Sangh is the ideological mentor of the ruling BJP.

The blue tick or "verified" mark signifies that an account is "authentic, notable and active", Twitter explains.

The microblogging site says the account must represent or be associated with a prominently recognized individual or brand. Accounts that are verified include those of key government officials and offices, including heads of state, elected officials, appointed ministers, institutional entities, ambassadors, and official spokespeople.

According to the site's terms, the blue tick or verified status may be removed any time, without notice.

"You may lose your badge if you change your account name (@handle), if your account becomes inactive or incomplete, or if you are no longer in the position you initially were verified for - such as an elected government official who leaves office - and you do not otherwise meet our criteria for verification," says Twitter.