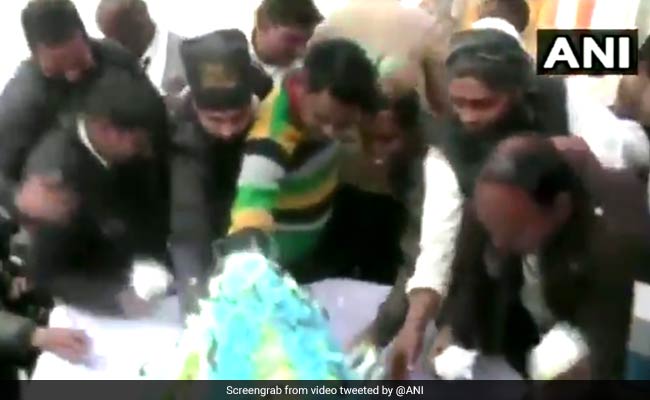 "Cake loot": The chaotic scenes had made headlines. It was also panned on social media

Unforgettable visuals of hordes of people fighting each other for mounds of cake on Mayawati's birthday - dubbed 'cake loot' by the social media - has drawn jeers from union minister Smriti Irani. In a tweet on Wednesday, Ms Irani said: "Look at the antics of the mahagathbandhan, they are busy looting birthday cake".

The tweet carried a television clip that showed the "cake loot" across Uttar Pradesh.

In Amroha, Meerut, Hapur and other cities, crowds were seen falling on enormous, multi-tiered cakes, scooping up huge chunks with bare hands. The area resembled a battlefield, and the cakes were gone in moments. Some made off with their loot. Others tried to stuff handfuls of cake into their mouth. Faces and clothes smeared in gooey icing were everywhere.

The chaotic scenes had made headlines. It was also hugely panned on social media.

#Mayawatibirthdaycake
Fighting over a piece of cake,
Aren't they scared of the shame they make,
Have some decency for Gods sake,
Are they real well wishers or are they fake?
pic.twitter.com/S716dWLQEq

On Saturday, Mayawati and Akhilesh Yadav had announced their Grand Alliance in the state that's meant to take on the BJP in the coming national elections. Both leaders claimed the news was giving "sleepless nights" to the BJP.

Out of power since 2012, Mayawati's party had been all but wiped out in the 2014 Lok Sabha elections. In the 2017 assembly elections in the state, the party had won only 19 seats, down from 80. But the victory of the alliance in the by-elections for the Gorakhpur and Phulpur Lok Sabha seats last year is seen as a mark of its resurgence.

That, added to the announcement of alliance, has put fresh heart in the party and added an extra sheen to the Dalit leader's birthday celebrations. In some places, local leaders of the party had even hired dancers for stage performances -- another decision that did not go down well with the social media.

While she was in power, Mayawati's birthday was celebrated grandly, if in a more traditional manner. Lucknow was festooned in blue fairy lights, Posters, hoardings and papier mache blue elephants lined the roads. The leader was photographed smiling in enormous garlands, and was weighed against laddoos.