Over the past weeks more than a hundred trains have run. But today, there was trouble in two states. In Bengaluru, around 150 people refused to go into institutional quarantine -- mandatory for returning migrants. 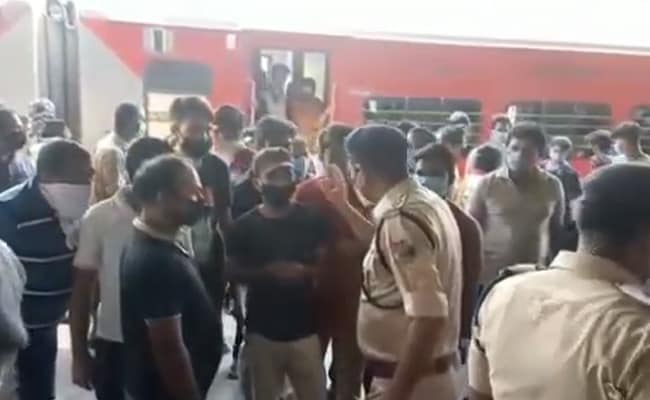 The return of migrants has triggered unrest in stations of Karnataka and Bengal.

The return of migrants has triggered unrest in stations of Karnataka and Bengal, with people complaining about amenities, refusing quarantine and alleging mismanagement in route allocation. The special trains for the migrants -- labourers, students and tourists -- had started on May 1, after their plight was repeatedly flagged by the states in their meetings with Prime Minister Narendra Modi.

Over the past weeks more than a hundred trains have run. But today, there was trouble in two states. In Bengaluru, around 150 people refused to go into institutional quarantine -- mandatory for returning migrants.

Eyewitnesses said they insisted on home quarantine, which is not allowed under the Central guidelines.

"We have been trying to persuade them. They should understand that there cannot be two rules .Most of the co-passangers have gone to institutional quarantine. How can we send the remaining passengers to the home quarantine," said SP Railways Borlingaiyya

In Bengal's Asansol Railway station, there was chaos around 8.30 this morning as a special train from Bangalore made a technical halt there on its way to its final destination of New Jalpaiguri in north Bengal.

Passengers got off the train, complaining there was no food and the toilets were dirty. But the bigger problem was, out of the 1,497 passengers on the train, around 750 wanted to go to South Bengal.

The angriest were 197 passengers who had expected to get off at Purulia, where the train was supposed to have made a technical stop, according to sources, but did not. Many of them almost left the station without thermal screening or any other health check as authorities had made no preparations for such a scenario.

Police and rail authorities had to persuade them not to go, pointing out that no buses were available to take them home. Finally, all barring 24 passengers got back on the train.

But when the train stopped again at Durgapur because of passenger agitation, 57 passengers got off. By the time the train reached Durgapur, authorities had managed to set up thermal scanning, but passengers were furious at the inconvenience.

Sources say this has been a common pattern in all the Shramik trains that have come into Bengal over the last 10 days. There is a lack of planning in putting passengers on trains matching their destinations. As a result, a huge bandobast in terms of buses for last mile connectivity has to be put in place.

Meanwhile, the West Bengal government has announced 105 more trains to bring migrants back. "Over the coming days, these special trains will embark from different states for various destinations across Bengal bringing our people back home," chief minister Mamata Banerjee tweeted. The opposition has been critical of her response to get migrants back.