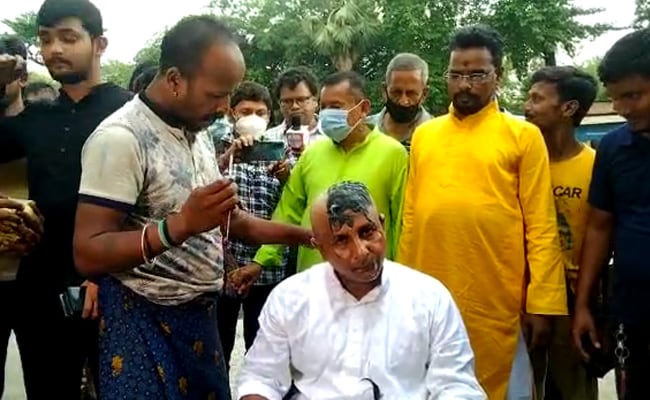 Ashis Das had his head tonsured at Kolkata's Kalighat temple.

Long-time BJP leader and MLA from Tripura's Surma constituency, Ashis Das, on Tuesday had his head tonsured for what he claimed was "penance for the misdeeds" of the BJP-led government in the state and performed a yagna at Kolkata's famous Kalighat temple, not far from West Bengal Chief Minister Mamata Banerjee's home.

He said accused the BJP of fostering "political anarchy and chaos" in Tripura and said people are unhappy with the performance of the state government, therefore he has decided to leave the party.

He has in the past praised Mamata Banerjee, going as far as pitching her for the post of Prime Minister, and for the last two years, has been seen as a strong critic of Tripura Chief Minister Biplab Deb.

There is speculation that Mr Das will soon join the Trinamool which is eyeing Tripura big time. The state will vote in early 2023.

"Today I have tonsured my head as penance of the misrule of the BJP government. I have decided to leave the party and time will decide my next step. But the type of anarchy and misrule Tripura has witnessed under the BJP-led regime has moved me and therefore for the past two years, I have been a critic of all these wrong deeds and I have been working for the people beyond the party and politics," said Ashis Das.

Meanwhile, Tripura BJP sources have indicated to NDTV that the party will take disciplinary action against Mr Das.

"Once Modi's messages stirred and touched the minds of people from all sections across the country. Modi had once said 'na khaunga, na khane dunga'. But now, it has become a popular jumla in the country," he said.

Earlier, Mr Das had highly praised Ms Banerjee for winning the by-poll in the Bhabanipur Assembly seat, said that many people and organisations want Ms Banerjee as the Prime Minister and her elevation to the post is very crucial as she is a Bengali.