Several other Congress leaders and supporters were also injured in the incident that took place between Ranirbazar and Khayerpur on the outskirts of Agartala.

Sudip Roy Barman undergoing treatment at a hospital in Tripura

A senior Tripura Congress leader has suffered head injuries and his car was vandalised during a Bharat Jodo yatra on the outskirts of Agartala on Thursday. The Congress has alleged that the attack on MLA Sudip Roy Barman, second time in less than two months, was carried out by the BJP.

Several other Congress leaders and supporters were also injured in the incident that took place between Ranirbazar and Khayerpur on the outskirts of Agartala.

The BJP has distanced itself from the attack. However, the Congress has alleged that the attack took place while they were under police detention and being escorted to a detention camp towards AD Nagar police line. 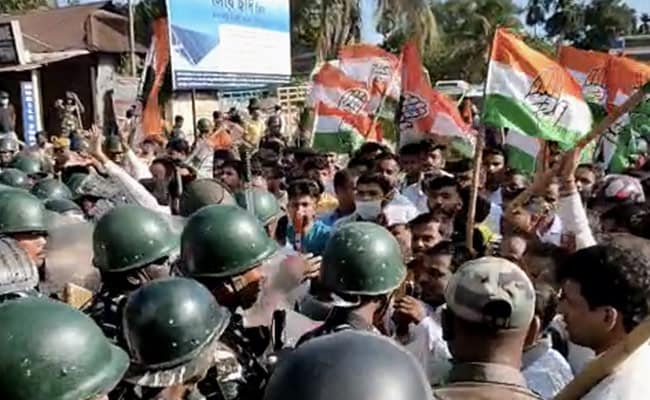 The Congress workers protesting in Tripura

"We were returning from a scheduled political program 'Bharat Jodo Padyatra' between Ranirbazar to Khayerpur. The police did not allow it and we were arrested. When some of our leaders were in their personal vehicle and few others along with supporters in police vehicles were being taken toward detention camp, we were attacked by BJP goons in front of the police who were a silent spectator," said Congress leader Radhyasyam Saha, an eyewitness.

Mr Barman, along with two more injured women party workers, is undergoing treatment at the trauma center of GB hospital.