TIPRA is headed by Tripura royal Pradyot Deb Burman, who resigned as chief of the Congress' state unit in September over differences with party leadership's handling of the citizenship law protests 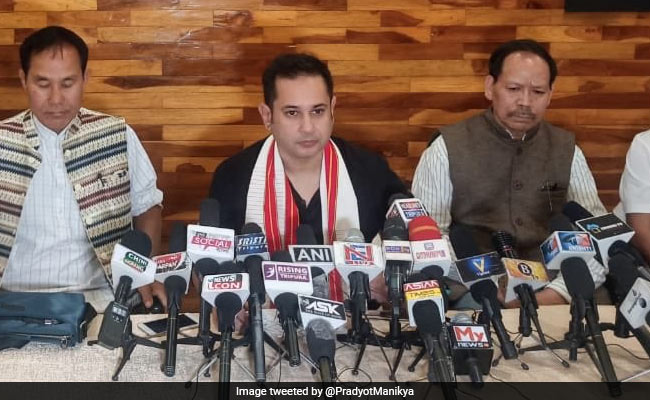 The BJP on Saturday suffered a massive defeat in tribal council polls in Tripura, where the party rules in alliance with the IPFT (Indigenous Peoples Front of Tripura).

The crucial Tripura Autonomous District Council polls were swept by a new outfit - TIPRA (The Indigenous Progressive Regional Alliance) - that won 18 of 28 seats. The BJP and its ally won just nine, with the other seat going to an independent candidate. The Left Front, which won the earlier election, and the Congress failed to win any seats.

TIPRA is headed by Tripura royal Pradyot Manikya Deb Burman, who resigned as chief of the Congress' state unit in September over differences with party's handling of the citizenship law protests.

The council consists of 30 seats, of which 28 are elected and two nominated by the Governor. These 30 seats are spread across 20 Assembly segments. In the last Autonomous District Council election, held in May 2015, the CPIM-led Left Front swept the table, winning 25 seats.

In the 2018 Assembly election the BJP-IPFT pair fought back to win 18 of the 20 constituencies that hold the tribal council seats. Three years later, though, they are set for an embarrassing turnaround.

The election was held on April 6.

On Friday a group of unidentified men allegedly attacked TIPRA leaders and candidates as they visited the office of the Sub-Divisional Magistrate (SDM) of Mohanpur.

The SDM's office is one of 16 centres where votes are being counted.

"There could be an altercation between TIPRA supporters and some people when he (Mr Deb Burman) visited the SDM's office.... we have not noticed (if) he was attacked. He reached home (Agartala) safely," Manik Lal Das, Superintendent of Police (West Tripura), told news agency PTI.

Mr Deb Burman, who is one of those contesting this election, said he went to the SDM's office with a candidate to discuss the counting process when violence broke out. He told PTI police personnel present were outnumbered by the attackers.

He also said Tripura Chief Minister Biplab Kumar Deb and the state's DGP (Director General of Police) had assured him of action against the culprits.

However, Education Minister Ratan Lal Nath later claimed the incident was the result of TIPRA supporters trying to create problems at the SDM's office.

The Autonomous District Council covers around two-thirds of the state's territory, and the tribal people who live and vote from here are a strong political force in Tripura - as well as a barometer of political parties' fortunes. They constitute around a third of the state's 40 lakh population.