Hathras Case: Trinamool Congress MPs, including Derek O'Brien, were stopped today when they were on their way to Hathras, the party alleged. 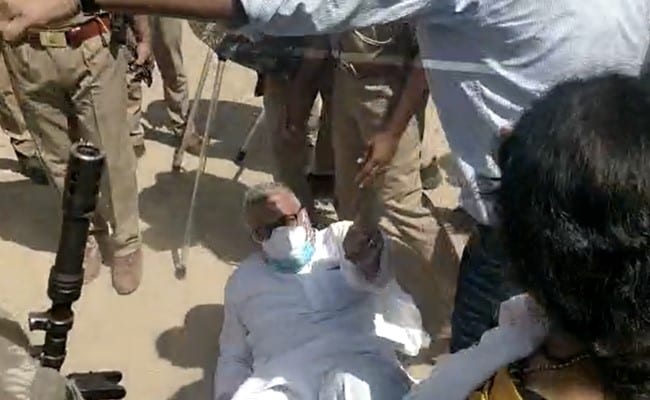 Trinamool Congress MP Derek O'Brien, who was on his way today to Uttar Pradesh's Hathras where a 20-year-old was gang raped and tortured about two weeks ago, was pushed to the ground in a confrontation with police when he and three other party leaders tried to enter the village where the victim lived.

In a 32-second video, a man in a white shirt and a helmet can be seen grabbing TMC MP Pratima Mondal by the shoulders to prevent her from walking to the village. Derek O'Brien rushes to rescue her and the man then pushes him to the ground.

Earlier, TMC MPs Pratima Mondal and Kakoli Ghosh Dastidar and ex-MP Mamata Thakur could be seen urging policemen with folded hands to let them enter the village. Derek O'Brien could be heard telling the cops: "Let the women go at least." However, their path was blocked by the policemen.

While officials have denied the manhandling of MPs, the TMC leaders are holding a sit-in about 1 km from the victim's home. "The allegations are totally false. Women constables requested them (TMC leaders) to go back as no one is allowed to enter the village. When they tied to enter forcibly, women constables stopped them," Hathras  sub-divisional magistrate Prem Prakash Meena was quoted saying by news agency ANI.

#WATCH: TMC delegation being roughed up by Uttar Pradesh Police at #Hathras border. The delegation, including Derek O'Brien, was on the way to meet the family of the victim of Hathras incident. pic.twitter.com/94QcSMiB2k

The 20-year-old who died on Tuesday had suffered multiple fractures, paralysis and severe spinal injury when she was assaulted by four men of the so-called upper castes from her village on September 14. The police said there was a gash in her tongue because she had bitten it when the men were trying to strangle her. The brutality to the woman, who belonged to the Scheduled Castes, and the post-midnight funeral by the police has triggered a widespread outrage.

"A delegation of Trinamool MPs traveled about 200 km from Delhi, and has been stopped by UP Police from entering Hathras," the TMC said earlier this afternoon, adding they "were traveling separately to express solidarity with the grieving family and convey their condolences".

"We were stopped by the UP Police when they were just 1.5 km from the victim's home," the Trinamool Congress quoted one of the MPs as saying in the statement.

Trinamool MPs continue dharna 1km away from victim's home after being Mandhandled and roughed up by UP police. pic.twitter.com/x31IkiEran

The action against the TMC leaders comes a day after Congress leaders - Rahul Gandhi and Priyanka Gandhi Vadra - were briefly detained over violation of ban on large gatherings amid the novel coronavirus outbreak when they were marching to Hathras.

Yesterday, a case was filed against Rahul Gandhi and Priyanka Gandhi Vadra under the Epidemic Act, hours after the brief detention. The two leaders had planned to meet the family of the 20-year-old woman.

Dramatic visuals on Thursday showed face-off between Mr Gandhi, 50, and the UP Police. He was also pushed and he fell to the ground during the tussle. 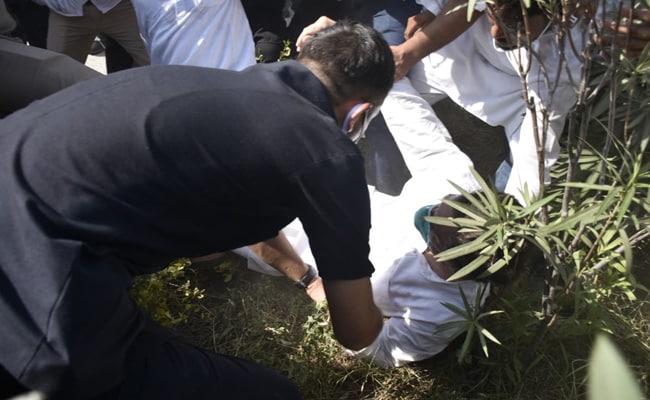 Yesterday, Rahul Gandhi was pushed to the ground during tussle with the UP police.

"This government has not allowed a father to perform the last rites of his daughter. This is injustice and this is how the government behaves with the people of Uttar Pradesh," Priyanka Gandhi Vadra told NDTV.