Normal life was hit in Jammu due to incessant rains since Monday morning, marring the Lohri and Makar Sankranti celebrations. 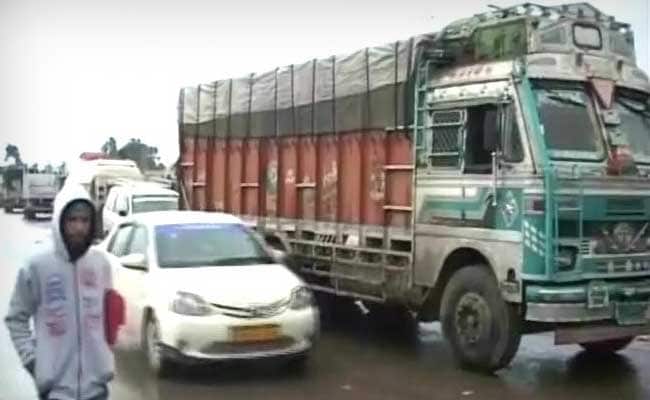 Traffic on the 270-kilometre Jammu-Srinagar national highway was suspended on Monday afternoon after torrential rains lashed most parts of Jammu region and played spoilsport in the Lohri and Makar Sankranti celebrations.

The traffic on the highway, which was allowed from Srinagar to Jammu this morning, was halted due to shooting of stones from the hillocks overlooking the arterial road at several places in Ramban district, a traffic department official said.

Heavy rains triggered the shooting of stones in Moumpassi, Digdole and Panthiyal areas this afternoon, forcing suspension of the traffic, the official said, adding snowfall is also continuing on the Kashmir side of the highway since Sunday including Jawahar Tunnel- the gateway to the valley.

"We are monitoring the situation and a decision to allow the traffic will depend on the stopping of shooting stones from the hillocks and the road clearance operation by the concerned agencies," he said.

Normal life was hit in Jammu due to incessant rains since Monday morning, marring the Lohri and Makar Sankranti celebrations. People usually lit bonfires and distribute sweets to observe the Lohri festival which marks the end of biting winter chill and the beginning of the harvest season. Reports of light to moderate snowfall was received from high altitude areas of Jammu region over the past 24 hours, the officials said.

An official of Shri Mata Vaishno Devi Shrine Board said the helicopter service to and fro the shrine atop Trikuta hills was suspended due to "bad weather". However, the pilgrimage is going on smoothly despite heavy rains, he said.

The minimum temperature across Jammu region continued its upward trend for the second day and settled several degrees above the season's average, an official of the Meteorological department said.

Katra town, the base camp for Vaishno Devi shrine, recorded a minimum of 9.4 degrees Celsius, while the Bhaderwah in Doda district was the coldest recorded place in Jammu region with a night temperature of 1.4 degrees Celsius.

The weather office has predicted heavy to very heavy snowfall (in upper reaches) and rains in plains of Jammu during the next 12 to 24 hours.