The annual event, to be held near the Statue of Unity in Gujarat, will be attended by Prime Minister Narendra Modi and NSA Ajit Doval. 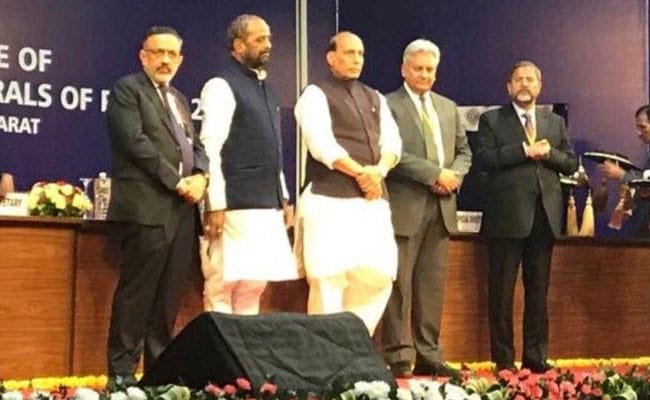 Home Minister Rajnath Singh with other dignitaries at the inaugural event of the meet.

Does the growing radicalisation in India originate from religion or genuine grievances? This question is going to keep the country's top cops busy this weekend.

The narrative that fundamentalism hinges largely on a person's religiosity is one of the most contentious topics under discussion at a director general of police-level conference being organised by the Intelligence Bureau at Kevadiya in Gujarat's Narmada district. The annual event, to be held at Tent City near the Statue of Unity, will be attended by Prime Minister Narendra Modi, Union Home Minister Rajnath Singh and National Security Advisor Ajit Doval -- among others.

Mr Singh addressed the inaugural session of the conference on Thursday.

"Grievances are based more on perceived notions than real issues. Various instances have shown that if these grievances are not addressed on time, they assume religious tones and cause law and order issues," a senior officer told NDTV, citing Kashmir as an example.

According to the officer, the role of social media in instigating misguided youth is another point of discussion likely to be addressed at the conference. "Officers are going to be briefed on how to tackle fake news," he added.

The radicalisation of 108 youngsters by ISIS recruiters will also be taken up at the event. "Even though the percentage is very low, this is an area of concern for the government," another officer said.

Other matters likely to be discussed at the conference are the steps initiated by the Ministry of Home Affairs to counter radicalisation in all theatres, from areas affected by Left-wing extremism to those in the hinterlands. The centre's efforts to promote democracy in Kashmir by holding panchayat and urban body polls will also be taken up.

The decline of Left-wing extremism will also come up for discussion at the meet. The Union Home Ministry claims that they have been able to reduce the number of districts to under 36 over the last few years. The officers will also talk on the need to speed up agreements with terrorist groups in the Northeast in order to bring peace to the region. While the Centre has suspended operations against at least 20 such groups in the region, they are yet to reach an agreement with those like the National Socialist Council of Nagaland (Khaplang) and the Bodo Liberation Front.

In his address at the inaugural function, the Union Minister claimed that the security scenario in the Northeast region has witnessed steady improvement in recent years. "All parameters of violence have improved in 2018 in comparison to corresponding period of 2017. There is 17% decline in the total number of such incidents and 38% reduction in civilian casualties," he said.

Mr Singh also cited government statistics to show how violence in Maoist-hit areas has abated in the last eight years.

Besides this, the government's efforts at containing Pakistan-sponsored terrorism in Kashmir and other places will be discussed at the conference. A special session will be held on the Inter-Services Intelligence's efforts to fuel propaganda for a Sikh nation. "Also, a section of the government fears that the Pakistani agency may misuse the Kartarpur corridor. That will be discussed too," an officer said.

While PM Modi and Rajnath Singh will stay in a special Mini Durbari Tent set up for VIPs at Tent City, the other tents will be occupied by top officials and state home ministers.