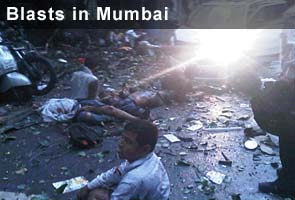 Mumbai: In a seemingly coordinated attack, three explosions took place in Mumbai one after the other on Wednesday between 6.54 and 7.06 in the evening - the first at Zaveri Bazaar in South Mumbai, the second at kabutar khana in Dadar West, central Mumbai and the third again in South Mumbai at Opera House. The Maharashtra home secretary has said 20 people have died 113 are injured. The death toll may rise. (Watch: This is an attack on the heart of India, says Maharashtra CM)

In Delhi, the Home Ministry has confirmed that this was a terrorist attack and Mumbai has been sealed and is on high alert. Mr Chidambaram said his ministry would make a statement every two hours or sooner. The next statement will be made at 11 pm today. (Watch: A coordinated attack by terrorists, says Chidambaram)

Mumbai Police sources say the Indian Mujahideen is suspected to be behind the attack. Union Home Ministry sources too say that the hand of the IM working closely with the Lashkar e Taiba is suspected. (Read)

Two members of the IM were arrested in Maharashtra yesterday by the Maharashtra Anti-Terror Squad.  However, sources confirm there was no intelligence alert or input that warned of today's terror attack.

Mr Chavan said the blast at Opera House was of the highest intensity.

All blasts took place during rush hour and in crowded places.The Zaveri Bazaar blast took place in an umbrella kept at the crowded Kahu Gali, a street of eateries. (Watch: Eyewitness accounts of the blast in Zaveri Bazaar)

Dadar, a middle class area also houses the Shiv Sena Bhawan and the famous Shivaji Park. The Home Ministry has said that Improvised Explosive Devices (IEDs) were used.(Read: Find out who is behind the blasts, Shiv Sena tells Govt)

There were also unconfirmed reports of an unexploded bomb being found in Dadar and a bomb hoax in Santacruz.

Early reports said a police control room had received a call claiming that there were serial blasts in Mumbai.

A National Investigation Agency (NIA) Team has rushed to Mumbai from Delhi to investigate. A National Security Guards (NSG) team and forensic experts have also been airlifted on a BSF plane and are bound for Mumbai. The police have appealed for calm.

Zaveri Bazaar has been hit before -  over 50 people were killed in twin blasts in 2002.

Malls, markets and other crowded places in Delhi, Chennai, Hyderabad and Bangalore are on high alert.(Read)