Thousands of candles and prayers at sunset for 'India's Daughter' 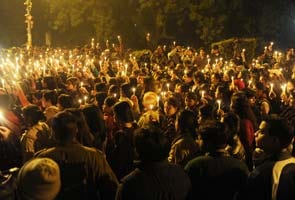 New Delhi: At sunset, more than a thousand candles offered a sombre glow at Jantar Mantar in Delhi, the designated location for protests against the death of a young medical student, who was gang-raped on a moving bus in Delhi two weeks ago.

The student died early this morning at a hospital in Singapore, where she had been flown with her parents on an air ambulance on Wednesday night.

The heinous attack on her and a male companion by six drunk men on a bus has aborted a wary resignation of poor security for women and ineffectual laws. Caught off-guard by the scale of public fury, the government has promised to introduce the death penalty for extreme sexual crimes, and fast-track rape cases to ensure verdicts are delivered quickly.

Today's demonstrations were peaceful, unlike last weekend, when police used batons, water cannon and teargas in clashes with protesters.  To prevent a repeat, the police sealed all access to India Gate and the surrounding high-security areas which host the parliament, Prime Minister's Office, important ministries and Rashtrapati Bhawan.

At Jantar Mantar, the candle-light vigil in the evening was accompanied by silence, a mark of respect for the young life lost.

The first protestors arrived at 10 am to express their grief and the death penalty for rape, which is now punishable by a maximum of life imprisonment.

They put a wreath studded with white flowers on the road, lit a candle and sat around it in a silent tribute to the young student. Members of a theatre group nearby played small tambourine and sang songs urging the society to wake up and end discrimination against women.

Sonia Gandhi, the Congress president, directly addressed the protesters in a rare television broadcast, saying that as a mother and a woman she understood their grievances.

Promoted
Listen to the latest songs, only on JioSaavn.com
"Your voice has been heard," Mrs Gandhi said. "It deepens our determination to battle the pervasive and the shameful social attitudes that allow men to rape and molest women with such impunity."