This year's awards were announced in a live event that included 1,000 invited guests in Barcelona. It was the first time since the awards started in 2009 that the ceremony did not take place in London. 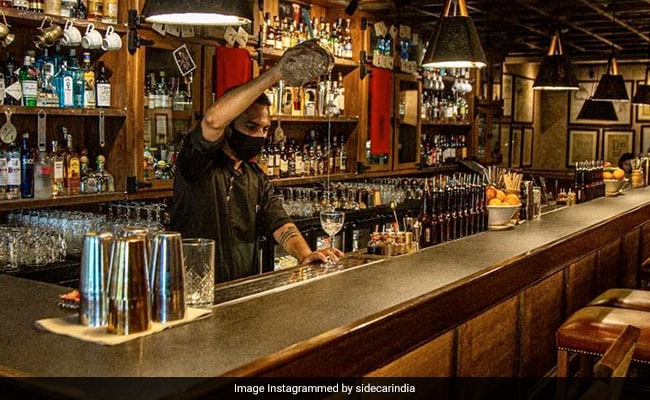 The annual list is compiled by World's 50 Best Bars.

Paradiso, a bar hidden behind a pastrami shop in the El Born neighborhood of Barcelona, has been named the top drinking spot by World's 50 Best Bars. It's the first time an establishment outside New York or London has won the prize. The hidden bar's entrance is a white refrigerator door after which visitors pass a counter specializing in cured meat. The bar features a dramatic, arched wooden ceiling and such cocktails as smoked milk punch with bourbon and tahini.

The No. 2 spot in World's Best went to Tayer & Elementary, the London bar that mixes casual drinks in its industrial front half and more ambitious cocktails in the back. It was last year's runner up, too. Third on the list was Sips, another Barcelona spot that soared 34 spots, from No. 37.

The top-rated taproom for the last two years, the Connaught Bar, ranks No. 8 this year, a relatively notable drop. "It's relinquished its crown," says presenter Mark Sansom, content director for the World's 50 Best Bars.

New York still maintains a powerful grip on the list. Six Big Apple bars are included in the top 50, including Overstory, which stands on the 64th floor of an office building in the Financial District. The idiosyncratic Double Chicken Please, which specializes in food-focused cocktails on the Lower East Side, placed highest among new entries, at No. 6.

This year's awards were announced in a live event that included 1,000 invited guests in Barcelona. It was the first time since the awards started in 2009 that the ceremony did not take place in London. (The awards were bestowed virtually in 2020.)

With the new venue came an unusual number of new entries: a total of 14 among the 50. Among them were places from cities making their debuts, including Red Frog in Lisbon and the speakeasy-style drinking spot L'Antiquario, in Naples, Italy.

The list had some notable omissions. Both El Copitas in St. Petersburg and Insider Bar in Moscow-respectively ranked No. 8 and No. 13 last year-were not under consideration because Russia invaded Ukraine earlier this year. "As an organization, we do not believe it is right to promote Russia as a drinking destination at this current time," says Sansom. "We acknowledge all those in Russia who have bravely denounced the actions of their leaders."

Among the individual awards given out during the ceremony, the Campari One to Watch prize was given to the minimalist Scandinavian bar, Roda Huset, in Stockholm, No. 78 on the list. The committee highlighted the bar's ability to break into the top ranks in the future. The Ketel One Sustainability title went to Little Red Door in Paris. And the Michter's Art of Hospitality award was handed out to Hanky Panky in Mexico City, the first time the prize was given to an establishment in Mexico.

The second half of the list, bars ranked 51-100, had been announced on September 27.

The list demonstrated the importance of relaxed COVID-19 restrictions in such rankings. Mexico City, which welcomed visitors back earlier than most other cities following the start of the pandemic, placed three bars in the top 15 spots, more than any other country. Tokyo, known for its talented cocktail culture, had only one spot: Bar Benfiddich took No. 48.

The annual list is compiled by World's 50 Best Bars, which is affiliated with World's 50 Best Restaurants; both are owned by UK-based William Reed Business Media. More than 650 drinks experts from around the world- including bartenders, writers, and consultants-cast votes regarding their experiences from January 2021 through July 2022.

Before the pandemic, voters could cast up to five votes for places in their home country; at least two votes had to be international. To address travel restrictions in such cities as Tokyo, the association allowed voters who were unable to travel to limit voting to five regional spots. "While voting guidelines aren't back to pre-pandemic regulations, we have made changes in the way voting operated to ensure the most authentic vote possible," says Sansom.