"They Have Narrow Agenda": Sonia Gandhi's Swipe At PM Modi At Rally 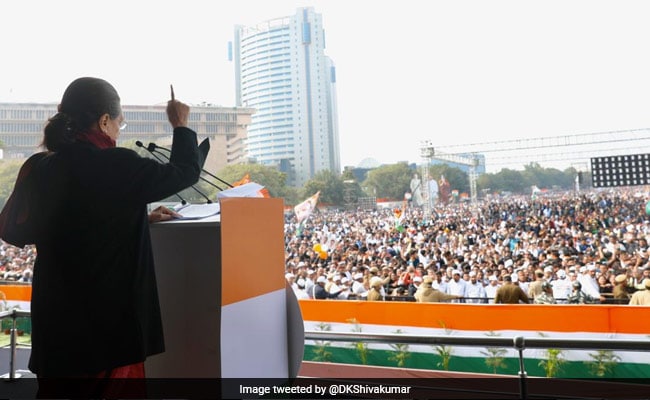 Congress president Sonia Gandhi on Saturday launched a strong attack on Prime Minister Narendra Modi, saying the Constitution was "wantonly breached" daily. Addressing the 'Bharat Bachao' rally organised by the Congress in Delhi, Sonia Gandhi attacked the BJP-led government over the Citizenship (Amendment) Act, saying it would rip apart the soul of India and the party will stand with all those who face injustice.

She said the situation in the country has turned serious for some time and it is "our responsibility to get out of our houses and movement against it."

She alleged Prime Minister Narendra Modi and Home Minister Amit Shah were not concerned about parliament or constitutional institutions and were only concerned about their own politics. "They have only narrow agenda, to make people fight and take attention away from real issues," she said.

Sonia Gandhi said the public's money was not safe even in banks and targeted the Prime Minister and Mr Shah. "Modi and Shah say these are good days," she said.

"Today the situation has come to such a pass that they implement and withdraw any section with their whims and fancies. They invoke President's Rule at their will, get bills passed in parliament without any discussion. They make a mockery by celebrating Sanvidhan Diwas and they wantonly breach Constitution every day," Sonia Gandhi said.

"...The whole country is asking, where is Sabka Saath, Sabka Vikas? Why the economy has sunk? Where employment opportunities have disappeared?" she said.

Sonia Gandhi said there comes a time in the life of a person, society and country that a decisive decision has to be taken. "That time has arrived. The country has to be saved and unrelenting struggle is to be carried out," she said.